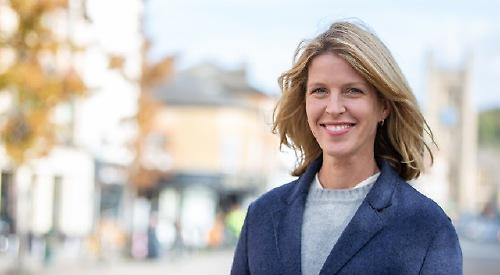 A COUNCILLOR is to stand for the Green Party in the Henley constituency at next month’s general election.

She was elected in May when a coalition of the Greens and the Liberal Democrats took control of the council from the ruling Conservatives.

Mrs Robb, who is originally from Sydney, hopes to oust John Howell, a Conservative who won almost 60 per cent of the vote at the 2017 election.

Mr Howell is standing again and will also face challenges from the Lib-Dems, the Brexit Party and Labour.

Mrs Robb, who is married with two children, says she will campaign on fairer funding for education, tackling climate change and affordable housing.

The former journalist said: “When I joined the Green Party, the climate and ecological crisis was nowhere on the news agenda. That has now changed as more and more people wake up to the scale of this global challenge.

“I am proud to represent the only party that puts the natural environment and human wellbeing at its very heart.

“Locally, the Government has plans for a South Oxfordshire covered in concrete and blighted by traffic and toxic air. This is music to the ears of the construction industry and big developers but ignores our natural environment and the views of local residents.

“It’s time the people of Henley constituency were represented by an MP who understands their concerns and will represent their interests - someone who will defend local democracy, promote truly sustainable growth and stand against the over-development of our beautiful countryside.

“I will fight for affordable and sustainable housing, proper funding for our schools and NHS and a Green New Deal — ambitious national investment in public transport and sustainable energy infrastructure.” Mrs Robb voted to remain in the EU at the 2016 referendum and is in favour of a People’s Vote on Brexit.

She said: “Since 2016, we have seen our standing MP vote to trigger Article 50 and support the illegal prorogation of Parliament.

“I stand very firmly for a change of approach, one that respects Henley’s decision and demands the British people get the final say on the matter.”

Mr Howell responded: “She needs to concentrate on her own policies rather than attacking the other political candidates.

“I think her words can be contradicted at almost every level and the question is whether I bother to do that for such a hopeless sort of political activity that I have always stood against.

“I never take any election for granted and I am certainly not taking this one for granted. I shall be working hard to convince people that they need the experience and expertise that I can bring.”

The Lib-Dems, who will be represented by Laura Coyle at the elections, have pledged to cancel Brexit and invest the money that would have been spent on areas such as the NHS.

The Brexit Party are expected to name a new candidate after Katharine Harborne decided to step down for health reasons.

She was diagnosed with breast cancer two years ago and said standing for election would not be “sensible”.

Labour have still to name their candidate.

Residents who have not received their card by this date should call 01235 422528 to check they are registered.

Polling stations will be open from 7am to 10pm on the day and the results of the election will be revealed the following day.