Services of remembrance in the Henley area on Sunday 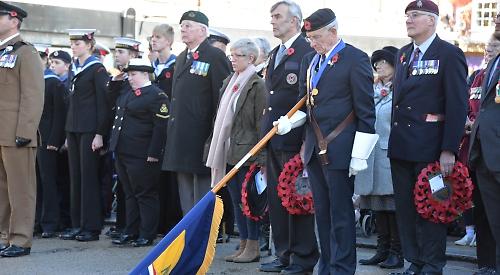 SERVICES of remembrance will be held in Henley and the surrounding villages on Sunday as follows:

THERE will be the usual service outside the town ball at 11am, which will be led by Rev Jeremy Taylor, the rector of Henley with Remenham.

Retired paratrooper Carlo Sisi, of the Royal British Legion, will read Laurence Binyon’s poem For the Fallen before the Last Post is sounded.

There will then be a two-minute silence followed by the sounding of Reveille.

Mr Sisi will read the Kohima Epitaph before the congregation sings Jerusalem.

Town clerk Sheridan Jacklin-Edward will give a Bible reading before prayers are said.

Mayor Ken Arlett will then give his address.

This will be followed by the hymn I Vow to Thee My Country, the act of commitment, the Lord’s Prayer and the National Anthem.

Wreaths will be laid on the town hall steps by Bernard Taylor, a deputy lieutenant of Oxfordshire, and Councillor Stefan Gawrysiak, on behalf of South Oxfordshire district and Oxfordshire county councils, as well as representatives of clubs and community groups, including the Henley Lions, the Rotary clubs of Henley, the Henley fire crew and the town’s twinning associations.

Following the service there will be a parade featuring the Henley air, sea and army cadets as well as scouts, guides and brownies.

This will be followed by light refreshments served in the town hall.

A fly-past by two Chinook helicpoters fron RAF Benson is scheduled to take place at about 10.45am.

Market Place will be closed from 10.15am to noon for the duration of the service and parade.

CURRENT and former servicemen and women will join residents of the village and neighbouring Ewelme in a parade that will assemble in High Street at 10.30am.

At 10.43am the parade will set off for the war memorial at the junction of Oxford Road and Church Road with the marchers in order of RAF personnel, members of the Royal British Legion, veterans and then scouts, cubs, guides and brownies.

The service of remembrance will begin at 10.53am.

The names of the servicemen from the parish who died in the two world wars as well as those who died while serving at RAF Benson since 1945 will be read aloud.

At 10.58am the parade will be brought to attention for the Exhortation and the Last Post, which will be sounded by a bugler from the Roke and Benson band, and the banners will be lowered.

A two-minute silence will be observed from 11am, followed by Reveille being sounded, the banners being raised and a reading of the Kohima Epitaph.

A fly-past by two Chinook helicpoters fron RAF Benson is scheduled to take place at about 11.04am.

This will be followed by the laying of wreaths, including those on behalf of Benson Parish Council, Benson Women’s Institute and Benson Youth Club as well as private memorials. Following a blessing, the parade will come to attention and march to St Helen’s Church for the remembrance service conducted by Rev Patrick Gilday.

Fiona Lovesey will read the lesson and there will be a collection for the Poppy Appeal.

The service will be followed by refreshments in the Canon’s Room from noon.

A JOINT service for the two villages will be held at St James’s Church, led by the Venerable Norman Russell.

This has been organised with the Bix branch of the Royal British Legion, which covers the villages of Bix, Lower Assendon, Middle Assendon, Stonor, Maidensgrove, Pishill and Russells Water.

The service will remember all those lost in the two world wars and subsequent conflicts. Relatives of those who took part in any conflict are welcome to attend.

The congregation is asked to assemble outside the church door to watch a fly-past by two Chinook helicopters from RAF Benson which is scheduled to take place at 10.45am.

Refreshments will be available in Bix village hall after the service.

ST Peter’s Church in The Warren and St John’s Church in Gosbrook Road will both hold services beginning at 9.30am. These will end in time for worshippers to join the ceremony at the Caversham war memorial in Christchurch Meadows, which begins at 10.45am.

A REMEMBRANCE service will be held at St Peter’s and St Paul’s Church at 10.55am, conducted by Rev Kevin Davies.

A SERVICE at All Saints’ Church will begin at 9.15am and will be followed by a commemoration at the war memorial on Dunsden Green at 10.15am.

THE act of remembrance followed by the traditional remembrance service will take place at St Thomas Church in Manor Road from 10.50am to noon.

THE congregation will gather at St Mary’s Church at 10.45am for an act of remembrance at the war memorial at 11am.

This will be followed by a short remembrance service in the church.

A SERVICE will be held at the war memorial in Wood Lane. People are asked to assemble at 10.50am.

Afterwards there will be a service at St John’s Church at which the Royal British Legion colours, together with those of scouts, cubs and beavers, will be received into the sanctuary. All are welcome.

RESIDENTS are invited to join members of the village’s branch of the Royal British Legion at 10.30am in a walk from the village green to St Bartholomew’s Church.

They will then parade down High Street at 10.40am to the lych gate, the village’s war memorial.

At 10.50am there will be a guard of honour and the act of remembrance and the Last Post will be sounded.

Afterwards, everyone will be invited into the church for the traditional service of remembrance.

A SERVICE will be held at Holy Trinity Church at 10.45am led by Rev Ian Thacker.

A SERVICE for residents of both villages will be held at All Saints’ Church in Church Lane, Peppard, from 10.45am to 11.45am.

A SERVICE will be held at St Peter and St Paul’s Church at 10.50am.

This will be followed by a remembrance service at the war memorial in Lower Shiplake at noon.

The families of pupils at Shiplake College will attend the school’s remembrance service in the Great Hall from 10.45am to 11.45am. Visitors are welcome.

A PARADE organised by the Royal British Legion will congregate at Pearson Hall before making its way through the village.

It will be led by the Reading Salvation Army Band and supported by scouts and guides.

A service will be held at St Andrew’s Church at 10.30am inside, conducted by the Rev Jamie Taylor.

Reading Blue Coat School will hold a service of remembrance at 9am.

PRAYERS of remembrance will be said at St John the Evangelist Church from 9.30am.

THERE will be a parade of uniformed organisations led by Col Barry Paddison and the St Sebastian’s Band of Wokingham.

The parade will form in Church Street at 9am and will set off at 9.30am, proceeding along High Street towards Twyford, turning right on Station Road, then on to Mill Green where there will be a service at 10.45am.

Standards will be paraded and the names of those honoured on the memorial will be read out.

Wreaths will be laid at the memorial and a field of poppy crosses will be planted for each name on the memorial.

A two-minute silence will be observed at 11am. All are welcome to attend.

At about 11.30am, the parade will march past the war memorial and return to Church Street.

A service will be held at St Mary’s Church at 10am given by the Rev John Cook.

Collections for the Poppy Appeal will be taken at the church and on Mill Green.

A PARADE from the town hall will feature veterans, service personnel, members of the Royal British Legion, fire service, Women’s Institute and Watlington Age Concern, scouts and guides as well as representatives of schools, shops and the library.

The marchers will assemble from 10.30am and set off at 10.45am along High Street to the Cross, the town’s war memorial, where there will be a service and the laying of wreaths.

The parade will be supported by the Watlington Concert Band.

RESIDENTS of both villages are invited to attend a remembrance service at St John’s Church in Whitchurch Hill at 9.30am followed by an act of remembrance at the war memorial in High Street, Whitchurch, at 10.45am.

VILLAGERS will observe an act of remembrance at the war memorial from 10.30am followed by a remembrance service in St Leonard’s Church.