Dancing mum steps back in time with trophy wins 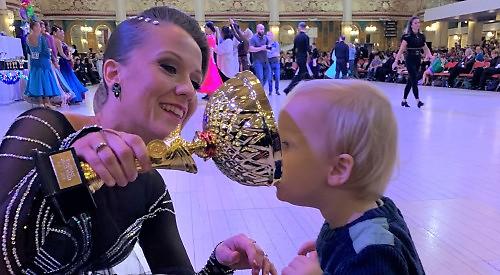 A BALLROOM dancer won two trophies in a national competition after taking part for the first time in four years.

Gemma Miles came second in the Latin section and third in ballroom at the Imperial Society of Teachers of Dancing’s grand final with her husband Richard, who runs the Miles School of Dancing at Henley town hall.

It was the first time she had taken part in the competition since 2015 when the couple started trying for their son Oscar, who is now 18 months old.

The competition took place at the Empress Ballroom in Blackpool’s Winter Gardens and the couple performed four routines — a rhumba and a samba in the first category and a waltz and a tango in the second.

They had choreographed these at their home in Henley Road, Caversham, rehearsing whenever they could find a babysitter for Oscar.

Mrs Miles, 41, who has been dancing for more than a decade and helps to run her husband’s classes, had won first place at the event several times previously.

But it was not until this year that she felt able to compete again. Mr Miles’s parents, Raymond and Joyce, who started the school in 1981, travelled to Blackpool with them to look after Oscar.

Mrs Miles, who got married in 2017, said: “It was really exciting to be back dancing again and I didn’t expect such a good result from what was my first competition in a long time.

“It was a struggle getting back to full fitness along with all the usual challenges that come with parenthood. It has been quite a climb but we made it.

“Rehearsing is so different now that we have a baby and emotions can run high because we’ve only got about a third of the free time we used to have but we managed to fit enough in.

“I wasn’t actually that nervous on the day because I think becoming a mum has changed my perspective on so many things.

“I’m not a naturally confident person and used to get so anxious before competitions that I couldn’t eat but this time I just set out to enjoy it. It was hard being away from Oscar all day but we were so pleased that he could be with us for the awards ceremony. He’s such a little treasure and really enjoyed playing with my trophy.”

Mr Miles, 45, said: “Gemma and I should have increased our training but that proved a bit of a challenge so we’re pretty pleased to have got third and second.

“It would have been nice to win but we’ll come back stronger next year.

“It can be pretty stressful dancing as a husband and wife because I wanted her to be the best she could and probably pushed her harder than any other pupil.

“The rehearsal schedule was a bit rocky but it feels like we really pulled it out of the bag on the day.

“I’m really proud of her and it felt great to be back together at that ballroom because it’s like Wembley for dancers — it’s a magnificent venue that nowhere else can rival.

“It’s rewarding just to take part because you have to perform highly to get that far.”

Mrs Miles was one of 25 pupils from the Henley class who took part in the competition and three who won trophies. Gillian Peeling won gold in the ballroom and Latin categories while Janice Carson won the pre-bronze ballroom event. All had qualified for the final after scoring highly enough in regional events.

Mr Miles, who danced with every one of his pupils during the 12 hours of competition, said: “I think everyone who danced was happy with their performance.

“There will inevitably be disappointments with a competition of this size but many pupils did better than they expected and some had reached the finals where previously they hadn’t managed to.”

Meanwhile, Oscar enjoyed a day out with his grandparents during the event as it was too hot and loud for a baby to attend but he was reunited with his parents afterwards.

They had photographs taken together, including one in which the toddler mimed drinking from one of the trophies.

Mr Miles said: “Oscar is obviously a bit too young to understand it all and I don’t know whether he’ll get into dancing when he’s older.

“People often ask but I think it’s important that he makes his own decision.”