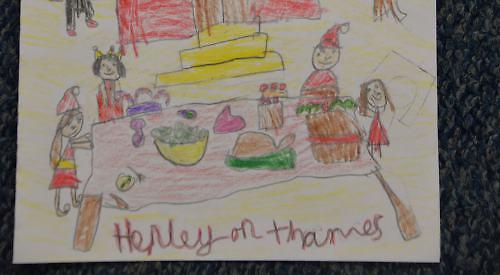 Phoebe Carey drew a picture of a festive banquet, the town hall and Christmas tree to win the contest, which had a theme of “A Christmas feast in Henley”.

She discovered she had won when the Mayor Ken Arlett and his wife Dorothy visited St Mary’s School in St Andrew’s Road, where Phoebe is in year 2. She was presented with a certificate and voucher for a family ticket to see the pantomime, Sleeping Beauty, at the Kenton Theatre.

She will also accompany the Mayor when they switch on the lights at the Henley Christmas Festival next Friday evening.

Phoebe, who lives in Reading Road, Henley, with her parents Paul and Julia and siblings Charles, four, and baby Louise, said: “I felt really happy when I found out I had won. I couldn’t believe it. I do like drawing.”

Mr Carey, an entrepreneur and former general manager of Rewind South festival, said: “We were over the moon when we were told the news.

“I couldn’t believe it but at the same time I could — even this morning she woke up and wanted to do some drawing.

“The whole family is thrilled for her. It is really fantastic that her drawing skills have been recognised at this early age. She is really excited to turn on the Christmas lights and really pleased that she is able to take the whole family to the pantomime.”

More than 220 children from St Mary’s, Rupert House School and Valley Road, Trinity and Badgemore primaries entered the competition. Councillor Arlett said it was hard to pick a winner but Phoebe’s entry stood out.

“It was nice and colourful and looked most like a Christmas card,” he said. “It had everything that we asked for with Henley, a big feast and the town hall. It ticked all the boxes. It was quite amazing for a six-year-old.”

Phoebe’s winning design will be printed as the Mayor’s official Christmas card by Higgs Group, publishers of the Henley Standard.

St Mary’s headteacher Rob Harmer said: “All our year groups took part in the competition and we are extremely proud and delighted for Phoebe.

It is hoped that the entries can be made into festive bunting to help decorate the town hall.

During his visit to St Mary’s the Mayor was shown a video, produced by year 5 children, as part of Anti-Bullying Week, and answered pupils’ questions about his role.