Squash player thanks leisure centre staff who saved his life 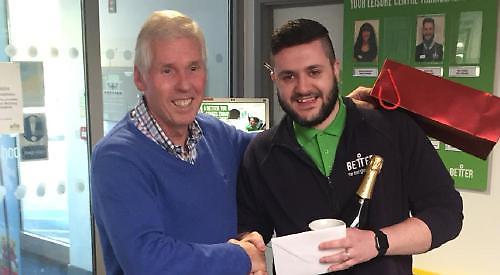 A SQUASH player whose life was saved by staff at Henley leisure centre has presented them with gifts to show his appreciation.

David Wright, 65, collapsed on court during a match and his heart stopped for 10 minutes.

His life was saved by duty manager Josh Fahey and recreation assistant Liam Peachey, who gave him CPR and then got his heart started again using a defibrillator.

Mr Wright, a retired vascular surgeon who is chairman of Henley Squash Club, said he was grateful to the men for acting quickly.

He returned to the centre to present the pair with a bottle of champagne each, money plus mugs he’d made himself at his home in St Mark’s Road, Henley, bearing his initials.

He said: “It was really important that they understood that what they had done was worthwhile in that here I am really not looking worse for wear. I feel completely normal.

“In my experience, it really affects the person doing the resuscitation much more than it does the sufferer or victim and that lasts for a long time. Both of them expressed that the gifts were not necessary but I choose to differ. The quicker that CPR is started and the defibrillator, if appropriate, is used, the better the outcome.”

Mr Wright’s son Jimmy, 25, drove him to the centre in Gillotts Lane as he is not allowed to drive for six months following the incident in October.

Mr Wright, who normally plays squash four or five times a week, was playing the last game in his team’s match against Bounty of Basingstoke when he collapsed.

His club mates called an ambulance while the two staff treated him.

He was taken by ambulance to the Royal Berkshire Hospital in Reading where he had emergency surgery to deal with a blockage of one of his arteries. He had a stent put in the artery to keep it open.

He then spent four days in hospital before being discharged and then recovered at home in St Mark’s Road, Henley, where he lives with his wife Jan.

Mr Wright, who worked for the NHS for 12 years before running a small surgical company, called it a “wonderful service”.

He also thanked the ambulance service and the hospital for performing “outstandingly well”.

He will have another procedure to check for blockages or narrowing of his arteries.