Closure of fire station put off due to election 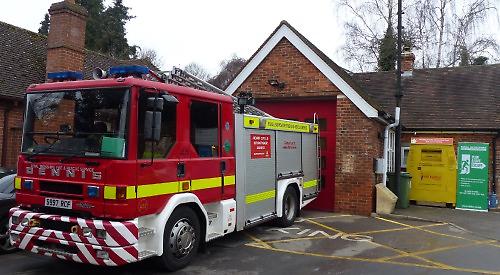 WARGRAVE fire station has been given another stay of execution thanks to the general election.

Members of Royal Berkshire Fire Authority’s management committee agreed at a meeting on Tuesday that the proposed closure should be delayed for six months.

They had been recommended to agree to the proposed closure of the station in order to help the fire authority find savings of £422,000 from 2020/21.

The Wargrave fire crew had already been given one reprieve on the condition that they improved their availability to 60 per cent but they failed to achieve this.

Councillor Colin Dudley, who chaired the meeting, said it would not be practical to make a decision during the election campaign as the political parties were promising increased spending in the public sector.

Members also agreed to conduct a study into the benefit of a community safety hub in Wargrave, similar to the tri-service buildings in Crowthorne and Hungerford. This would house fire and rescue, ambulance and police services under one roof.

Cllr Dudley said: “As you can imagine, the crews were very disappointed that they had not managed to achieve the 60 per cent target, especially after the loss of two key members of staff.

“They asked if there was any way they could be given another year to meet this target but we already have very significant budget pressures and it would just not be possible without additional financial support.

“I have been working hard with colleagues at Wokingham Borough Council to find additional funding. I hope we can find a way to give the crew another six months to help them to reach the target.

“I would propose that we change the recommendation to the fire authority that we defer this closure until at least June 2020 to give them one final chance.”

The Victoria Road station, which opened in 1903 and is the oldest in Berkshire, has been under threat since April 2017, when the authority decided to close it to save costs.

The decision was deferred for 12 months as a result of a campaign by Wargrave residents and to see if availability could be brought up to 60 per cent. This was then extended for nine months in November last year.

The station, which is manned by retained firefighters, has a history of struggling to recruit and at one stage the crew’s availability was as low as 3.2 per cent. The fire service has a response target of 75 per cent within 10 minutes of a call being made to 999 and Wargrave contributes to less than 0.1 per cent of this figure.

Cllr Dudley said: “We have extended this once before and I think to extend it again shows that we on the fire authority are listening to the people of Wargrave.

“They have had a slight setback with two senior staff leaving and hopefully this extension period will give them enough time to train staff up to the required standard.”

He added: “Making a decision during an election period and before we know the implications of what is going to happen — with both major parties offering some kind of end to austerity — would be foolish.

“I welcome this change of heart and wish Wargrave the best of success in trying to reach an extremely challenging target.”