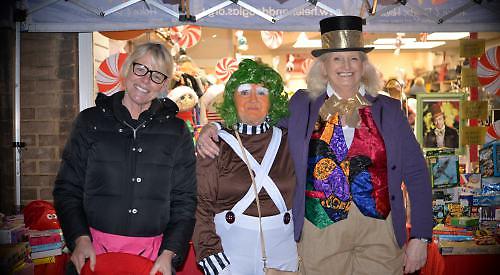 SHOPKEEPERS in Henley say they received a welcome boost in trade thanks to the town’s Christmas festival.

Many businesses opened late in order to capitalise on the thousands of people who converged on the town centre on Friday evening.

Some traders were offering discounts and many handed out seasonal food and drink in order to lure customers.

Barry Wagner, owner of Gabriel Machin butchers in Market Place, said he had sold out of produce by 8pm.

He said: “We had our best year ever. We often sell out on this night but this was the fastest we’ve ever done so.

“I thought it was a fantastic night and a great start to the festivities in Henley.

“It was really well organised and everyone seemed really happy.

“The only complaints we heard from people were about getting into Henley. They thought the roads were closed too early.”

Debbie Austin, a director of clothes shop Vinegar Hill in Duke Street, said takings were up 15 per cent on last year. She said: “It was absolutely rammed. We always have additional staff on the evening to make sure we can see all the customers.

“The atmosphere was nice and bubbly and we had very big queues. There were lots of people browsing who said they would come back to us.”

George Jackson, who has worked there 15 years, said: “I love the late-night shopping event. Even if we didn’t make any money I would open because it is such a lovely way to kick-start Christmas.

“We were quiet this year compared with the last couple of years but in this industry I can have a quiet week and then if I sell one ring worth £20,000 it makes a huge difference. We have had a fantastic year so far and I hope it continues.”

He added: “Henley has been through peaks and troughs and I think we have come out of the hard times. Footfall is down and parking is an issue that needs to be sorted but I also know the town council has tried to improve that.”

Manager Matt Stone said: “It was very busy compared with a normal night. The people working in the shop didn’t even get a chance to get out and join in.

“I know the town council has made some changes this year to have fewer fairground rides and more local artisan stalls, so maybe that helped.

“There was a lot of debate this year about whether to have the event on November 29 or December 6. As a retailer, I believe the earlier the better. We want to get people shopping and thinking about buying presents.”

Laurence Menswear in Duke Street served mince pies and mulled wine and was raising money for a boy with muscular dystrophy.

Owner Laurence Morris said: “We were open until 8.30pm and it was a really good night. Sales were on par with last year and the scarves and knitwear were very popular this year.”

Liz Felix’s millinery shop in Reading Road was open until 7pm before the owner ventured into the town centre to enjoy the festival.

She said: “I would say it was better than in previous years. We were open for an extra two hours and people were picking up lots of clothes as they walked by.

“I thought the festival was much nicer than in previous years. The quality of the traders was far superior and I thought the town centre looked beautiful.”

Susanna Beynon, manager of the Helen and Douglas House charity shop on Duke Street, was dressed as Willy Wonka as she sold raffle tickets for a chance to win a £25 Amazon voucher.

She said the shop’s takings were up 30 per cent compared with last year.

Ms Beynon said: “It was a great night with a lovely atmosphere. All the items in the shop moved very well and by having a stall out on the street it brought more people into the shop.

“We had three volunteers in the shop and two more outside selling the raffle tickets and someone collecting money in a bucket, which made £146.”

The Hart Street Tavern had an offer on half price food for children between 4pm and 6pm and staff were outside with mulled wine and mince pies.

General manager James Molier said: “We were very busy. We have only been here for six months so we didn’t know what to expect.

“There were lots of families around and we wanted to offer them something healthy before they filled themselves up with candy floss.”

He added: “I went out with my family and it was a very busy night. The parking could have been better and I know people said they were stuck in traffic from the late afternoon onwards. Parking is not a new problem but we need it to be resolved.”

The Angel on the Bridge pub was also busy. Assistant manager Joe Organ said: “We had lots of people stop off on their way to the festival. We are not in the town centre, so we were not expecting it to be crazy busy, but it was definitely a good night. Our mulled wine and cider were very popular.”