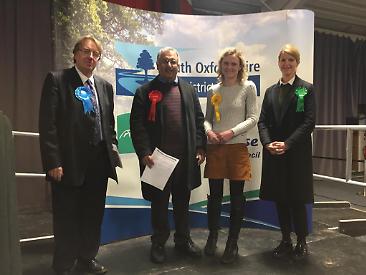 JOHN HOWELL says he will "fight for the constituency" after he was elected as MP for Henley for a fifth time.

The Conservative was declared winner of this year’s general election at about 5.20am today (Friday) but with a reduced majority of 14,053.

He received 32,189 votes, almost double that of his nearest rival Laura Coyle, of the Liberal Democrats, who attracted 18,136 votes.

Mr Howell, who succeeded Prime Minister Boris Johnson in 2008, told the Henley Standard that his priorities were education, housing and climate change.

He said: "I'm very pleased to have won. It's a great achievement and boost to me to find that the constituency once again backed me in my role as MP.

"I'm going to continue to fight for the constituency as I always have, particularly in education, housing and climate change."

Mrs Coyle, who was standing in her second election, more than doubled her number of votes from the 2017 poll, where she claimed 8,485 votes.

Elsewhere, former prime minister Theresa May, has retained her seat as MP for Maidenhead. The Conservative, who represents Wargrave and Sonning, secured 32,620 votes.

This was more than double her nearest rival, Joshua Reynolds, for the Liberal Democrats, who received 13,774 votes.

Steve Baker retained the Wycombe seat for the Conservatives with 24,766 votes, ahead of Labour's Khalil Ahmed, who received 20,552 votes.

Matt Rodda retained the Reading East seat for Labour with 27,102 votes, ahead of Conservative Craig Morley, who received 21,178 votes.

Nationally, the Conservatives have won an overall majority, winning 364 seats out of 650 seats so far, with one constituency still to be declared.

The Labour Party has endured its worst election results since 1935. Its leader Jeremy Corbyn has said he will not lead the party into the next election.

Meanwhile, Jo Swinson will step down as Liberal Democrat leader after losing her seat to the SNP by 149 votes.