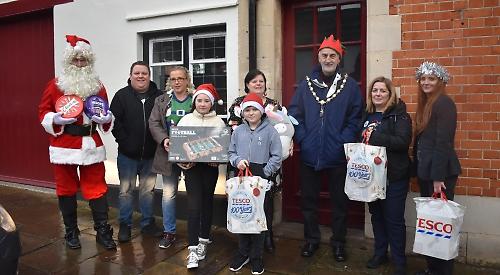 MORE than 200 toys and gifts were handed out on the children’s ward at the John Radcliffe Hospital on Saturday thanks to donations from Henley residents.

The annual toy run comprised four cars travelling from Henley to the hospital in Oxford.

The drivers met outside the town hall before being given a send-off by Mayor Ken Arlett and staff from the Henley Tesco store, where donations were made.

The initiative, which is organised by the Gainsborough Residents’ Association, is now in its seventh year. It has traditionally featured motorcycles but the volunteers opted to go by car this year due to rain making the roads hazardous.

The bags were packed with colouring books, soft toys, stuffed animals, chocolate boxes and games. The appeal was supported by Boots and Bagatelle Toys in Bell Street.

Association chairman David Eggleton, who is also the Deputy Mayor, took the opportunity to dress in a Father Christmas outfit. He said the young patients at the hospital were cheered up by the visit. He said: “It made such a huge difference. One young boy had just been to see the doctor and was not very happy. When I popped my head around the door he was so happy, which gave me an overwhelming feeling. A young girl came over and gave me a cuddle.

“Every child gets a toy and it means so much to be able to put a smile on their face before Christmas. That is the whole reason I do it.”

Councillor Eggleton was joined by Paula Isaac, vice-chair of the association, her husband Rob and their son Jamie.

Mrs Isaac said: “We would like to extend our thanks to Tesco for collecting donations for us in store and the staff at Henley Town Council for collecting too. As well as toys and gifts for the children, we received donations of chocolates and biscuits for the wonderful nurses who work in the hospital for which they were extremely grateful.

“This event is lovely and we would like to continue to hold it each year, hopefully with support from local businesses and volunteers.”