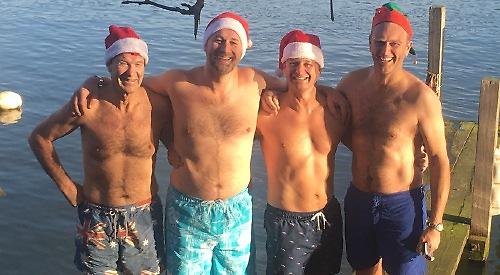 PEOPLE are being urged not to attempt to swim across the River Thames in Henley on Boxing Day.

The informal “Boxing Day dip”, which first took place in 2009, has become a tradition but Henley Open Water Swimming Club says people should stay at home because the river conditions are dangerous and someone could be killed.

It is being supported by Leander Club, which is fencing off its pontoon on the Thames towpath to prevent people from using it to climb out of the water.

The town council has also agreed to put up warning signs at its moorings near Red Lion Lawn in Thames Side, on the opposite bank, where people typically jump in.

Andrew Lane, chairman of the swimming club, says the water temperature is likely to be 5C or less and it would therefore be classed in the competitive world as ice swimming.

He says few people are experienced enough to tackle those temperatures safely and when they do, it is typically at organised events with marshals and safety boats. Additionally, the Environment Agency has declared a “red board” warning, meaning the river is flowing too fast even for boats.

As well as risking being swept away by the currents, anyone swimming in the river could be hit and injured by debris, which is more prevalent due to erosion of the banks.

Mr Lane has circulated a warning among club members and wants everybody in the Henley area to be aware of the dangers.

He said: “We’re very concerned at the number of people getting involved and don’t want any doubt that we do not in any way endorse this event.

“I understand that last year there were quite a few people present with very little experience of being in the river, let alone when it’s so cold.

“People could very quickly find themselves swept away, especially as the cold quickly saps your strength. You might think you’re fit and strong but that changes drastically in lower temperatures.

“Apart from the obvious concern for the swimmers themselves, there’s a danger that other people will try to help if they see them in trouble, which could put their lives at risk as well. People with no experience shouldn’t even think about getting in the river under the current conditions.”

A record 63 swimmers joined last year’s event, including model and TV personality Calum Best. They crossed a 70m stretch of water in temperatures just under 6C.

Members of Leander Club noticed the pontoon sinking into the water as the pack were climbing out and relayed their concerns to the club’s general manager Paul Budd.

They were also worried about the number of swimmers who parked in the lanes near the club, which could block emergency vehicles’ access in the event of an accident.

Mr Budd said: “If an awful lot of people are trying to exit the water at the same time, there’s a risk of somebody being swept under the pontoon and drowning.

“I believe this is a death waiting to happen. The club is closed on Boxing Day but we will fence off the pontoon because, having been made aware of what’s going on, it would be wrong to turn a blind eye.

“It would be terrible if anything happened. I’m sure there’s a lot of Boxing Day bravado and I’d hate for people to see our warning as a challenge — everyone should be aware that it is simply not safe.

“An event on this scale should have measures like a controlled start and safety boats but it has nothing of the kind. We’re concerned that people may turn up thinking it’s a ‘proper’ event and not realising the danger.”

The town council cannot forbid people from swimming but its signs will warn people that they jump in at their own risk.

Town and community manager Helen Barnett said: “We’re interested in the public’s safety so we took this seriously when it was raised as a concern. We don’t want to spoil people’s fun but hope they will take it on board.”

The event was launched by the Heller family, of Skirmett. Just five people took part — Douglas Heller, his sisters Rosie and Beatrice, their cousin Henry Collett, from Russell’s Water, and a neighbour, Simon Moyle. The following year 24 people took part and numbers have increased since then.

This week, the family said they were unaware of a swim this year and advised against due to the river conditions.