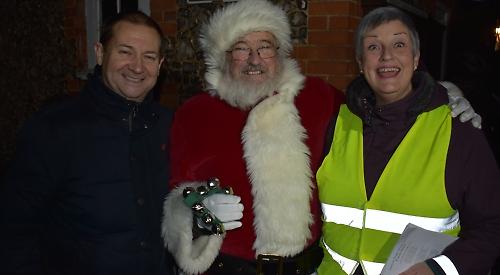 RESIDENTS of Binfield Heath bid farewell to their postman at the village’s annual carol concert.

Tim Randall, 58, who had held the role since 2006, recently moved to Throckenholt in Lincolnshire.

He returned to be presented with a glass rose bowl, which was donated by the village polo club, by Marina Hart, who writes the Binfield Heath newsletter.

He also received a cheque for more than £500, which had been donated by villagers and he will give to the Hillside Animal Sanctuary in Norfolk.

Mr Randall began working for Royal Mail in 1990 and was given the Binfield Heath route, which includes Crowsley, Harpsden and Damer Gardens in Henley, 13 years ago. He said: “I was only going to do the job for six months when I started. At the time there was a property recession and I needed a job.

“I lasted nearly 30 years because it gets into your blood. I enjoy working outside and in a way I’m my own boss.”

Mr Randall said he already missed Binfield Heath.  “I’m missing everybody, it’s not the same,” he said. “This village is surrounded by urban centres but it is very rural and there’s a lot of heart here.

“There is something unusual about the job. You have a window into people’s lives and sometimes it can be very strange. In summer last year I knocked on a front door as they had a parcel that required a signature. I knew they were at the back of the house, so I went through the back gate into the garden and they were there having their breakfast and were both starkers! I think I was more embarrassed than they were.

“Another time I got back to the sorting office and there was someone’s cat in the back of my van. It must have hopped in while I was sorting out somebody’s parcel. Luckily, I knew whose cat it was and took it back.”

Villagers sang carols including We Wish You a Merry Christmas, O Come All Ye Faithful and Ding Dong Merrily on High accompanied by members of the Woodley Concert Band who were under a gazebo.

A collection raised more than £140 for the Chiltern Centre in Henley, which supports adults with physical and learning difficulties and their families.

Guy Cleall, a member of the society, said Mr Randall had been popular with villagers.

He said: “We will certainly miss him. Everybody knows his name. He chats a lot so the post could take a while to be delivered but he’s a character.”

Villager Fiona Rollason said: “He was one of the greatest assets the village ever had. He was so kind and looked after the elderly and kept an eye on people.”