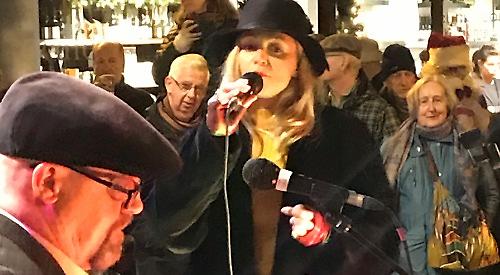 THE organiser of the Henley Living Advent Calendar says he is proud after it raised a record sum.

Hundreds of people attended performances by musicians, dancers and singers at a range of venues each night during December until Christmas Eve.

Volunteers with buckets collected for a different charity or good cause at each show.

Organiser Richard Rodway, a partner at the Head Partnership solicitors, said: “I’m hugely pleased and proud. I’ve always said that it’s good to make money for good causes but that was never the reason for the event in the first place. It was just a fantastic by-product. But ultimately, when you know you are raising money for good causes, the final total is some indicator as to how much people enjoyed it.

“I went into it wanting to break our previous record and despite having some not great weather at times, it was a fantastically enjoyable month.

“People were hugely positive and it was great to come out and see people night after night, often the same faces.” Among the final performers were CBBC Newsround presenters Leah and Ricky Boleto. On Monday last week they read the Night Before Christmas by Clement Clarke Moore with their son Enzo in Henley Market Place.

Rebecca Poole, known as Purdy, sang Rockin’ Around the Christmas Tree and some of her own songs accompanied by Matt Foster on guitar, who has previously performed with Ma Bessie and the Pigfoot Band. The performances were in aid of the NSPCC.

On Christmas Eve about 500 people gathered outside St Mary’s Church in Hart Street to sing carols, led by the church choir.  The carols included Once in Royal David’s City, Away in a Manger, Hark! The Herald Angels Sing, Ding Dong Merrily on High and O Come, All Ye Faithful.

This raised a single-night record of £732 for the Mayor’s chosen charities, the Nomad youth and community project, Henley Music School and the South Oxfordshire Mencap Society.

Mr Rodway said: “We have had big audiences who have been really positive, joyous, enthusiastic, spirited and generous no matter what the weather and we have raised a massive amount for good causes. The bar has been set high for next year.”