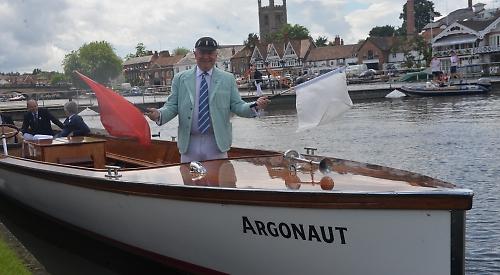 A MAN from Remenham has been recognised for his contribution to rowing.

Mike Williams, 68, of Remenham Lane, received a distinguished service award at a dinner held by FISA, the world rowing federation, in London.

Mr Williams, who used to serve on FISA’s executive committee and as treasurer, said it was an honour to receive the gold medal together with Mike Tanner.

He said: “Mike and I were both members of the FISA executive committee. I was there 25 years. He did rather less but we are both long-servers.

“The two of us got a standing ovation, which was really rather nice given that the room was full of all the people most involved in international rowing. It’s nice to be recognised at the top level as having made a good contribution.” Mr Williams’s first experience of the sport was as a cox at boarding school in Northamptonshire on the River Nene and continued when he went to Cambridge University.

He stopped when his career in finance meant he couldn’t spare the time any more.

Then in 1989, he was elected treasurer of the former Amateur Rowing Association at the invitation of the late Peter Coni, a former chairman of the royal regatta. He helped rescue the association from financial oblivion by doubling members’ fees, among other initiatives.

Mr Williams was also licensed to umpire at the royal regatta.

Part of his remit at FISA was budgeting for competitions, including the Olympic regatta and the rowing world championships.

He said: “I stepped down at the beginning of last year after 25 years of trying to keep the financial side of rowing going, spending money sensibly and keeping to the budget. Rowing as a sport doesn’t have a lot of money.” Mr Williams has also resigned from the committee responsible for managing the royal regatta and has been replaced by former GB rower Sarah Winckless.

He praised the committee’s decision to extend the regatta to six days from 2021 in order to accommodate more women’s competitions.

Mr Williams said: “We really do not have enough events for women. The timetable is full and it’s very difficult to reduce the size of the existing men's events.

“Whatever we do informs what happens in the sport throughout the country. The only real way to create room for extra events was to have an additional day.

“It was an essential decision. If we had gone on not having those events we would have been severely criticised by the world in general.”