New bridge on footpath to be replaced by council 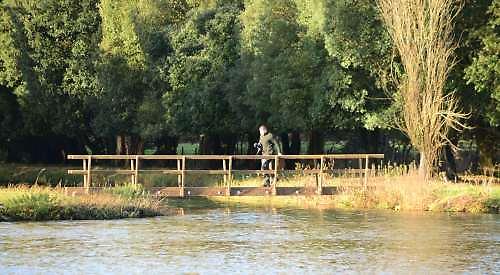 A NEW footbridge on a public footpath near Henley is set to be replaced only weeks after being installed.

Buckinghamshire County Council says it will replace the wooden bridge put in place by the Fawley Court Estate just before Christmas with its own structure.

This comes 15 months after the old bridge collapsed and the path was closed, with the council and the estate blaming each other for repeated delays.

The footpath on the western bank of the River Thames crosses the estate’s land but the bridge is the council’s responsibility.

The path was re-opened last month when the estate installed a replica bridge and criticised the council for failing to do so.

Now the council has responded by saying it had intended to install a new bridge this month and this was now ready to be brought in.

It may be wider than the old one in order to accommodate people in wheelchairs. Clive Harriss, acting cabinet member for planning and environment, said the estate had taken the council by surprise by installing its own bridge.

He said: “We were close to sorting everything out and then this happened. You almost couldn’t make it up.

“Our bridge was virtually ready for installation and just a few more weeks’ patience would have seen this situation resolved, at least for the short term.

“After our exhaustive efforts to reach a mutually satisfactory agreement with the landowners, without resorting to statutory powers, we’ve been presented with a fait accompli that does not address a number of issues we, as the local authority, have to take on board, as well as the issue of access for the less able.

“We now potentially have construction, ownership and liability issues to sort out with the estate which could all have been avoided.”

The estate has said that it is willing to remove its bridge in order for the council to access the site.

However, it accused the council of failing to communicate about the intended timescale of the project and said it only learned of the council’s plans after ordering the construction of its own bridge.

It had already offered to pay for a like-for-like replacement, saying it could be installed before Christmas, but the council refused.

In a statement, the estate said: “If at some point the council wishes us to remove the new bridge so it can install another replacement, we will be happy to allow this. If it happens, we just hope it will be obvious to everyone that the council has spent our public money wisely.”

Councillor Harriss said: “We have a duty to all our residents and visitors to provide access to everyone along our rights of way and our end goal is to install a fully accessible bridge so that more people have the opportunity to use and enjoy this magnificent and popular path in future.

“I’m encouraged that the estate says that it would be happy to remove its bridge and allow the council to install another replacement. I welcome this approach and am positive that by working together we can get a workable solution.”

In a statement, the Fawley Court Estate said it wanted to thank Henley town councillors and Mayor Ken Arlett for writing to the county council’s chief executive  Rachel Shimmin and their “continued interest in the reinstatement of the bridge”.

It continued: “We shall also be writing to Ms Shimmin with a chronology of all the correspondence.

“We are saddened the council chose to communicate through the Henley Standard and social media rather than directly with us.

“As a Grade I listed estate and park, we are very used to working with authorities and this continued stance by the council not to reply to our enquiries is totally unacceptable and unreasonable. We are mystified that they say they had a bridge ‘virtually ready’ on December 13 when they sent us the design details of their proposed bridge at  9pm on December 11 asking for our comments.

“The first communication from the council about an accessible bridge was not until June 19, or eight months after the bridge collapsed.

“What we can agree upon from the council’s comments are ‘you couldn't make this up’.

“If there is to be yet more red tape and delay by the council, we hope this will not affect those that are back enjoying their walks through Fawley Court.”

The path closure angered walkers, who faced having to use the busy Marlow Road as an alternative route.

The council was due to install a new bridge in June, but poor weather delayed the project.

This was pushed back to August to avoid clashing with Henley Royal Regatta but was then postponed again after the council said it had not been able to obtain access to the site.