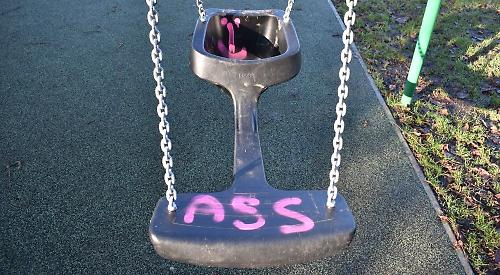 A COUNCILLOR is calling for “a stronger approach” after another vandal attack at Freemans Meadow in Henley.

A set of swings, which had only been installed earlier last year, has been spray painted.

The incident happened some time between the evening of December 29 and the following morning and saw a pink smiley face and the word ‘ass’ painted on one of the swings.

The swings, which sit independently from the rest of the play equipment, were installed last year as part of a £70,000 project.

Due to the time of year, town council staff were unable to remove the graffiti until they returned to work on January 2.

The latest incident was reported to Thames Valley Police by councillor Donna Crook, who says she was verbally abused by teenagers when she went to take photos of the swings.

She said: “It is just reckless vandalism. I am really getting to the end of my patience with these people because they just want to create havoc.

“Maybe we should be taking a stronger approach. We spend lots of time and money and then we have to find ways of paying for the damage, which means they are putting a strain on council resources.”

This is the latest in a series of incidents at the meadow, off Fairmile, with residents suspecting a group of teenagers.

On the evening of December 18, several newly planted saplings were broken or destroyed.

Friends of Freemans Meadow is once again offering a reward for information which leads to a successful prosecution.

A spokeswoman said: "There is a particular group of youths who gather at Freemans on a regular basis after school and in the school holidays who are suspected of being responsible for these various acts of vandalism. All information is passed on to the police.

"It's such a shame that just a very few badly behaved kids try and spoil things for everyone else.

“We want to encourage all the lovely people of Henley to come out and visit Freemans Meadow on a regular basis with their little children to play in the fantastic new play area and to walk their dogs and come and make this lovely place their own."

Call Thames Valley Police on 101 if you have any information about either of the incidents.