Performer is full of beans about children’s musical 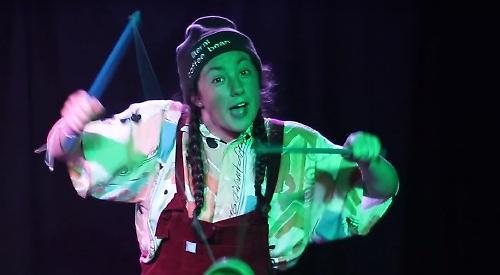 A GRADUATE is hoping to capture children’s imagination with her debut musical about the adventures of a tap-dancing coffee bean.

Rosie Dart wrote Tappuccino with her friend and co-star Rhys Rodrigues while they were at the University of Durham, where she studied English.

They will be performing the show at the Vault Festival in London on February 29 and March 1 following a successful run at the Edinburgh Festival Fringe in August.

Rosie, 22, who lives in Station Road, Wargrave, with her parents Annette and Peter, hopes they can perform it at primary schools once the London shows have finished.

Tappuccino is the story of a coffee bean, played by Rosie, who is harvested in the Amazon rainforest and exported to a Swiss coffee shop, where she befriends a barista.

She warns him about the massive deforestation taking place in her homeland and the pair set out to stop it.

The hour-long show features circus tricks, shadow puppetry and several original songs with Rhys, who has a music degree, playing the piano. There is also an interactive section where children come up on stage to add themed props to a washing line.

Rosie, who attended Queen Anne’s School in Caversham, has danced since was seven and learned tap, jazz and ballet at the Redroofs Theatre School in
Maidenhead.

She and Rhys were both members of the university drama society and directed more than 30 musicals together, including a production of Rent.

She thought up the name Tappuccino while sitting in a coffee shop and wanted to build a show around it. The result was a half-hour musical with a fun, silly storyline that was aimed at adults more than children.

She and Rhys performed the original version at the coffee shop for an audience of fellow students.

They then rewrote it for a younger audience and added the environmental aspects before taking it to the Fringe.

They had a month-long stay at the Gilded Balloon, one of the festival’s main venues, and were named a festival highlight by the Edinburgh Evening News as well as receiving a four-star write-up in the Edinburgh Fringe Review.

Rosie said: “We didn’t quite know what we were doing at the beginning but it was a fun idea to share with our friends.

“Later on we realised it worked well with an environmental message because of the link with coffee beans and rainforests.

“It started out as mostly me with Rhys accompanying but now we’ve adapted it as a proper two-hander.

“It was tough marketing ourselves and getting it out there but feedback was a real confidence boost.

“It feels like a pretty awesome achievement to have started with this jokey idea and taken it to one of the biggest venues at the Fringe.

“We’re looking forward to London and it would be great to bring it to young people in schools.

“Our friends have been to see it and said they really enjoyed it. It’s aimed at children but it’s got a broad appeal because it’s really uplifting and fun.”