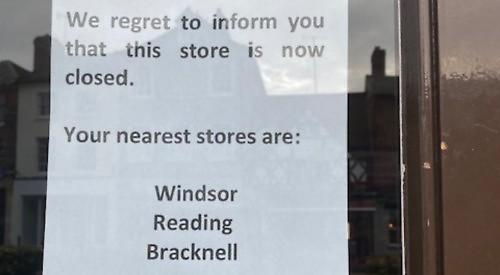 A CAFE in Henley has shut suddenly.

Patisserie Valerie didn’t open for business on Monday and sign on the door says the branch in Market Place is now closed with the nearest outlets in Windsor, Reading and Bracknell.

It is understood staff arrived for work to find the branch had shut.

Meanwhile, clothing store Fat Face, in Bell Street, is to have its last day of trading on Saturday.

There are plans for two new flats on the upper floors of the building, which currently serves as its stock room, and this will be converted under permitted development rights.

However, an application has also been submitted to construct a narrow, single-storey rear extension to the shop unit in order to provide a better and more convenient stock-room. This has not yet been decided.

Patisserie Valerie was threatened with closure in October 2018 when bosses said the business needed "an immediate injection of capital" to continue trading in its current form.

Later that month its parent company, Patisserie Holdings, was saved from collapse

Luke Johnson, who held a 37 per cent stake in the firm, agreed to provide up to £20million in loans.

The board raised another £15 million by issuing new shares.

The company discovered that £9.7 million had been spent in two overdraft accounts set up with HSBC and Barclays without its knowledge.

Then, in February last year, a takeover deal was agreed after Patisserie Holdings collapsed the previous month.

The firm secured the backing from investment company Causeway Capital to take over 96 outlets.