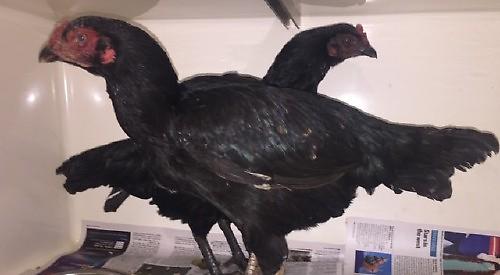 TWO escaped chickens were rescued by Henley vets after they were seen running around a petrol station.

Staff from the Veterinary Centre were called to the Esso garage in Reading Road at 9am on Monday.

Kennel assistant Lilly Howells and a veterinary nurse managed to grab the birds, which are now being kept at the centre.

They will remain for two weeks to see if the owner claims them.

Emma Clark, financial and administration manager, said: “There was a lady who was either at the garage or walking by and noticed these chickens were running around on the forecourt.

“She popped her head through our door and asked if we could help. We were helped by a gentleman who just happened to be at the garage at the time.

“Chickens are difficult animals to catch. You have to corner them, which is what they attempted to do, but they are incredibly fast. They managed to grab one and then the other was captured with help from the gentleman. It was under a car, which had just filled up with petrol.

“It has generated quite a stir and we have had lots of jokes about chickens crossing the road but as yet nobody has come forward.

“We have got people who would be prepared to look after them if we couldn’t find the owner. The birds are both perfectly healthy. We are hoping to get in touch with the garage to ask them if we can review their CCTV. It might be that they were in someone’s car and managed to escape.”

It is the first time in five years that the centre has rescued a chicken. Other unusual strays have a included a hamster, snake and terrapin turtle.