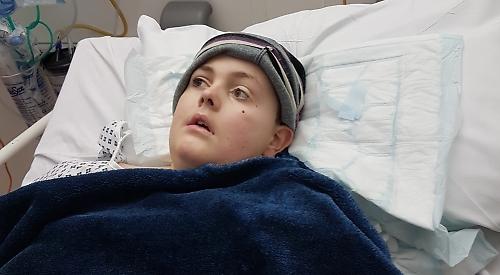 A BOY fighting cancer for a third time has undergone surgery in an attempt to finally beat the disease.

Charlie Ilsley, 12, of Buckingham Drive, Emmer Green, was given the all-clear for the second time in August after undergoing radiation treatment in Turkey which his family had to pay for.

However, the disease has returned after a lumbar puncture showed cancer cells in his spinal fluid.

On Monday, doctors at the John Radcliffe Hospital in Oxford, where Charlie originally had surgery, inserted an Ommaya reservoir under his scalp so that chemotherapy drugs can be delivered directly to his spine. The operation took three hours.

Charlie’s parents, Mark and Toni, had feared he couldn’t have any more chemotherapy after months of intense treatment at a hospital in Ankara.

But they say the new procedure, which has been funded by the NHS, offers them hope without Charlie having to suffer the serious side effects he experiences when chemotherapy is administered normally. Charlie had to wait seven hours before being taken into surgery and his mother stayed with him overnight. Mrs Ilsley said: “I tried to stay strong and as I walked down to surgery he said ‘Mum, please don’t let them hurt me’ and I just lost it.

“I went down to see him after surgery and they said he would be really tired. When he woke up he said, ‘that wasn’t too bad then’. He wanted a packet of Quavers and to play his PlayStation and watch Family Guy. I reckon he had about 20 stitches. He didn’t need any paracetamol. He was absolutely fine.”

Charlie, who attends Highdown School in Emmer Green, returned home on Tuesday and will now have chemotherapy drugs administered via the reservoir next week.

The following week he will return to Germany for a second course of dendritic immunotherapy, which is designed to help his body to identify and fight cancer cells. He will then have further chemotherapy treatment via the reservoir. Mrs Ilsley said the treatment would continue until all the cancer cells had gone or it was no longer effective.

“It’s just a wait and see thing,” she said. “It’s s*** that he’s got to have something again. I wish they didn’t have to do this to him all the time. At least we’re giving him a chance.

“Charlie’s fed up with it. He said to me ‘so I’ve got to go through 2020 with cancer’ but he doesn’t dwell on it. He’s not suffering, he hasn’t got any side effects and he’s still well. He asked if he can go back to school because he wants to show off his scar.”

The dendritic immunotherapy treatment costs £60,000 and the family managed to raise more than £40,000 in a matter of days before Charlie flew to Germany with his mother for the first session.

He previously had CyberKnife radiotherapy treatment after two tumours were discovered on his spine.