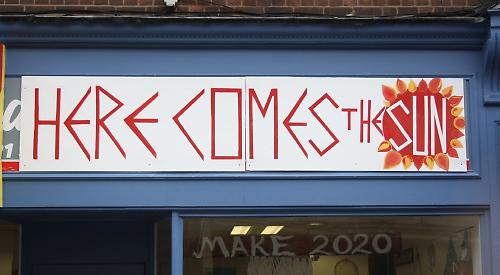 A POP-UP shop in Henley which opened just before Christmas is to stay for at least a few more months.

Here Comes The Sun, which was originally called Xmas Pop-Up, was so successful over the festive season that owners Greg and Gina Hope now plan to remain for as long as possible.

The couple, from Hare Hatch, expect to stay in the former Galaxy Nails studio premises in Duke Street until March, after which they could either stay for longer or even move into another unit permanently.

The shop sells hand-made art and craftware as well as clothes, homeware, incense, decorations and gifts. Many of the items were made by women living in developing countries while others are made by local producers, including candles by Lost and Found, which is based in Henley.

The shop also sells Hope clothing for children aged two to seven. The range was designed by the couple, who have travelled extensively around the Far East, and is made by Thai tribeswomen.

Mr Hope, a yoga instructor, said: “We’ve had a very encouraging start and there seems to be a lot of demand for sustainable produce in Henley. People like the fact that they’re hand-made and ethically sourced.”

His wife came up with the name of the shop based on George Harrison’s song.