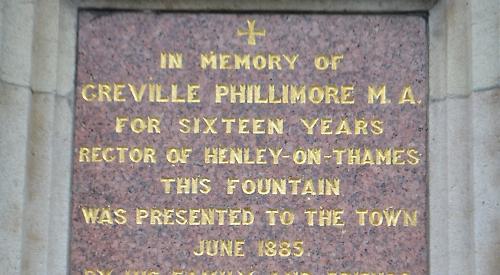 A NUMBER of water fountains could be installed in streets in Henley.

The town council wants to give people the opportunity to refill their bottles in a bid to reduce waste from single-use plastic ones.

It is considering placing one fountain in Market Place and also wants to turn Phillimore Fountain, next to St Mary’s Church in Hart Street, into a spring.

Pump manufacturer Stuart Turner, which is based in Greys Road, has offered to donate a pump and Thames Water will connect the fountain to the mains.

Councillor Sarah Miller came up with the idea and town manager Helen Barnett is assessing its feasibility.

She said: “We’ve still got a lot of work to do on this. We’ve been talking about putting water fountains into the town for a long time and we are working with Thames Water.

“We are all about greening Henley and no longer using single-use plastics. We would love to have more water fountains in the town.”

The council previously considered the idea of installing water fountains in response to the Refill campaign, which was launched in October 2017.

Thames Water said that it would help with the installation of fountains, which would cost between £4,000 and £5,000 each.

The council agreed to think about where the fountains could go but none was installed.

Refill is to designed make refilling water bottles easy, convenient and cheap as part of a national drive to reduce plastic “pollution”.

Businesses that are part of the scheme display a window sticker stating “Free tap water available here” and are included in the Refill app.

The scheme was introduced in Henley by Cllr Miller and environmental campaigner Julia Carey.

• The Phillimore Fountain was unveiled in June 1885 by the friends and family of former rector Greville Phillimore, who served Henley for 16 years.