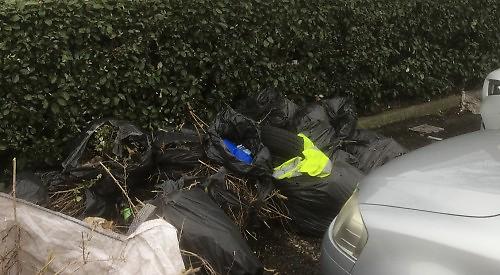 ALMOST 20 bags of waste were fly-tipped in the car park at Tesco in Henley.

The mess was cleared by Henley Deputy Mayor David Eggleton, whose wife Nicky spotted the pile of rubbish near the entrance to the supermarket off Reading Road as the couple arrived to do their shopping on Sunday.

Councillor Eggleton, who is chairman of Henley in Bloom, said: “It’s disgraceful. There were about 18 bags of garden waste with flower pots, garden chemicals, a number of household bits, a car tyre and a high-vis jacket.

“I went through all the bags to see if I could find anything to identify those responsible.” He said a member of the council’s parks services staff had noticed a suspicious looking van parked at the spot on Saturday.

Cllr Eggleton said; “Someone has obviously done their garden up. One of their neighbours will know where this has come from and I urge them to come forward. Tesco are checking their CCTV as they have got a camera that overlooks that area.”

Cllr Eggleton said it took about an hour to clear the mess and he had given the green waste to the parks services team to put through a composter. He will dispose of the rest at the tip.

He added: “I would urge people, when they are getting rid of waste, to make sure whoever they use has got a licence and not to dump it on the side of highways or anywhere else.”