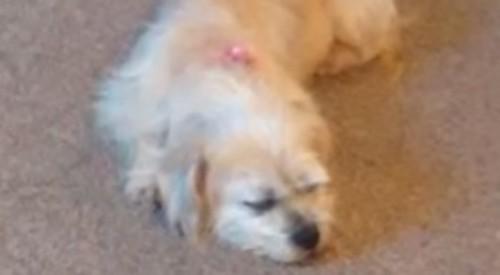 A TRAIN driver saved the life of a runaway dog when it wandered on to the Henley branch line.

Nesta, a five-year-old shih tzu, was wandering, terrified, near the line just outside Henley on Monday morning with a lead attached.

The driver of the Great Western Railway 7.52am service from Twyford to Henley spotted her as he was approaching the town.

He stopped the train, climbed out of his cab and retrieved the dog, who then rode with him to Henley station where she was handed over to staff for safe keeping.

Luckily, details of Nesta’s owner, Tracey Lancaster, were attached to her collar so ticket officer worker Richard Philips was able to contact her.

Mrs Lancaster, 63, from Wargrave, then came straight to collect her pet, who had only just had an operation and was still wearing a vet collar.

She said: “The driver is one of life’s angels, isn’t he? What a marvellous thing to do. I’m so grateful to him. I’m very relieved because Nesta’s very little — she’s only about the size of a cat and she’s very frightened of people. I was so pleased to see her.

“When I picked her up she was shaking so I wrapped her in a blanket and gave her a cuddle. Up until then I was going to wring her neck. She’s okay considering her adventure and the bad weather.”

Mrs Lancaster, who also has an eight-year-old Jack Russell cross called Buddy, had only had Nesta for two days after collecting her from a rescue centre in Wales. She had previously been used for breeding at a puppy farm.

The dog ran off while being taken for a walk in Highfield Park in Wargrave at about midnight on Saturday.

“She must have been spooked,” said Mrs Lancaster. “She wrapped her lead around me two or three times and decided to make a run for it. I have severe arthritis and I fell over. I screamed after her, which was probably the wrong thing do to.”

She and about eight volunteers searched until about 3.30am without success. Then she spotted Nesta at 4.30am near the convenience store in Victoria Road but couldn’t catch her.

Her search continued on Sunday but to no avail. Then on Monday morning she received a message from a woman whose husband had spotted her dog while on a train approaching Henley.

“He had obviously heard that the train had stopped and that driver had picked up the dog up,” she said.

“About three or four minutes later the ticketmaster at Henley rang me and said ‘have you lost your dog?’ He said ‘I’ve got your dog’ and I replied ‘oh, I love you’.

“I put my coat on over my nightie and went to get her.

“I took her home and gave her a nice breakfast. Now she’s wrapped up in her little bed now and she’s okay.”

Mr Philips said the drama began at about 8.10am when a  message came up on his screen to say that the train was delayed because there were animals on the line.

“It  turned out there was a dog on the line,” he said. “I went out to tell the customers what the situation was and then walked  down the end of the platform to see if I could see said dog. When I got down there  the train was coming in very, very slowly.

“The driver had stopped his train, got out, collected the dog and got her with him in his cab. As soon as he got to the station he offloaded her to me. I took her inside the ticket office. She sat on the floor next to my feet and didn’t move.

“She was shaking like a leaf. Whether that was fear, cold, tiredness or hunger... probably all of them together.

“The poor thing was absolutely done in but luckily the owner had her comfort blanket.

“My customers offered me treats for the dog but I didn’t take them, which was just as well because she had had an operation and couldn’t eat solid food. He also had one of those collars on her head.”

Mr Philips urged other dog owners to ensure their pets have collar tags showing their contact details and have been mircrochipped.

He said: “She’s a very lucky dog, exceptionally lucky. Most animals don’t have such a happy ending.”

However, she felt that rush hour commuters would be interested in to know he reason, adding: “All together now... aaaaaah.”

A GWR spokesman  praised the driver and said: “We’re really pleased we were able to get Nesta back home.

“We’re sorry there some disruption but I hope  passengers understood that we needed to get the dog off the track.”