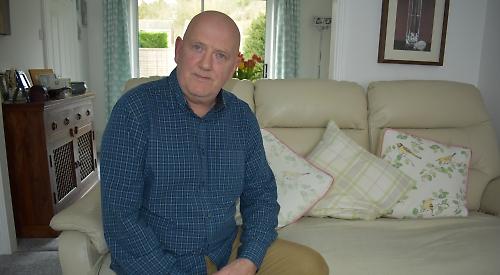 A FORMER prison officer has been told he must repay more than £100,000 after an error in his pension payments.

Paul Davidson, who lives in Deanfield Road, Henley, with his wife Wendy, has also seen his monthly payments slashed by more than £1,000 by the civil service pension scheme.

Mr Davidson, 62, who worked at HMP Huntercombe in Nuffield as a senior officer for 10 years, was medically discharged from work in April 2012 following a work-related “severe depressive episode”.

He spent 31 days at a clinic in Windsor and after his release his wife had to stop working full-time in order to care for him. Mr Davidson, who also worked at prisons in Devon and Dorset in a career spanning more than 20 years, recovered but in January last year he saw his monthly payment of about £2,500 cut by £1,089.

The discrepancy was spotted by his wife when she went to withdraw money from a cash machine in Tavistock, Devon, while they were there caring for her parents.

Mrs Davidson said: “I thought ‘there must be some mistake’. I went back to Paul and said ‘there’s a problem’.”

After several calls to Her Majesty’s Revenue and Customs and MyCSP, the Civil Service Pensions scheme administrator, Mr Davidson was told that as well as the cut in his pension he would have to pay back £101,392.

MyCSP wrote to him saying the administrator had “overpaid” his civil service pension benefits and apologised.

The letter said: “This was due to an administrative error and we have now taken steps to ensure it does not happen again.

“The overpayment occurred because the correct amount of pension was not deducted from your injury benefit award.

“As we have been paying your benefits at an overstated rate, we regret to inform you that this has resulted in an overpayment of £101,392.

“We can only pay you the amount you were entitled to under the scheme rules. Because we have paid you more than this, we have to ask you to repay the difference.”

Mr Davidson said: “I burst into tears. I broke down, Wendy broke down. I was hissing and spitting like a rattler.

“I trusted them wholeheartedly to get it right and for there not to be mistakes.

“How do I know, if I accept the outcome, like some people have in these pension scandals, that these figures are right?”

The couple are now struggling financially and Mr Davidson is taking medication for depression and migraines as well as sleeping tablets.

He said: “We go out with £20 in our back pocket. We don’t do anything lush and we haven’t gone on holiday since this happened. I’m forever in Waitrose or Tesco adding up everything.

“I’ve worked all my life and I’ve never, ever been in this situation. The money at the time seemed good and we planned accordingly.

“It has been a long struggle because with a mental illness it’s not happy all the time.

“When you look at 20 years and six months’ service that’s a lot to take away in no time at all bearing in mind it was my career.”

The couple, who have been married for 34 years, fought the ruling and contacted the Pension Ombudsman.

It was initially unable to act on Mr Davidson’s behalf as the complaint was ongoing but in December last year it agreed to take on the case due to a lack of response from MyCSP and the length of time.

Mr Davidson has also written a 14-point complaint to the trustees of the civil service pension scheme demanding answers.

Jane Von Bargen, of the scheme compliance unit, replied: “Mr Davidson can only receive the pension he is entitled to and the repayment period for Mr Davidson will be longer than the overpayment period.”

She offered £500 in compensation to be offset against the overpayment for “the distress and inconvenience” caused by the previous pension administrator.

Mrs Von Bargen added: “It is acknowledged that Mr Davidson’s case has been poorly handled by MyCSP for which I would like to sincerely apologise.”

The recovery process had been suspended pending an investigation, she added.

Mr Davidson now has until February 21 to respond.