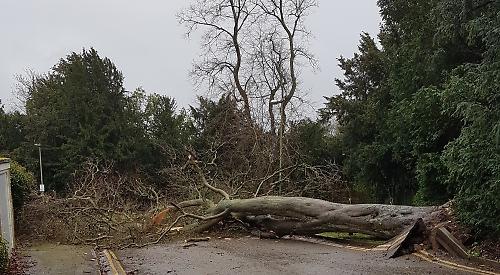 STRONG winds and heavy rain from Storm Ciara caused problems on the roads over the weekend.

People were advised not to travel unless necessary, with some rail services disrupted due to maintenance.

Drivers were warned to look out for flying debris, with longer journey times on affected routes due to fallen trees.

This happened in Ancastle Green, where a large tree was blown over by strong winds.

Light rain and wind speeds of around 40mph are predicted for Monday morning, with conditions due to settle from 6pm onwards.

Tuesday’s forecast currently shows sunny spells in the morning with high wind speeds, which start to fade in the afternoon.

Flooding on the eastbound stretch of the M4 at junction 12 resulted in a lane closure on Sunday.

Henley fire station posted a message on Twitter on Saturday, warning people to stay safe in the current conditions.

They said: “With Storm Ciara on its way to Henley overnight and tomorrow, we just want to make sure you take care when travelling on the roads and be wary of high winds and rain if you do decide to brave it.”

They said: "Strong winds are expected across the Thames Valley today. Please take care if you are out and about.

"If you are driving, give yourself extra time, be cautious and remember to give high sided/large and heavy goods vehicles extra space."

Both of Emmer Green’s football matches on Sunday were called off due to the poor weather.

This included a home semi-final against Magpies 91 in the Berks and Bucks Intermediate Cup and a visit to Henley for the reserves.

The club said: "Unfortunately, both games are off this morning because of the weather.

"There are safety concerns due to the wind in relation to travel and also with flying debris from any trees near both pitches."

If the weather is causing problems where you live, email news@henleystandard.co.uk