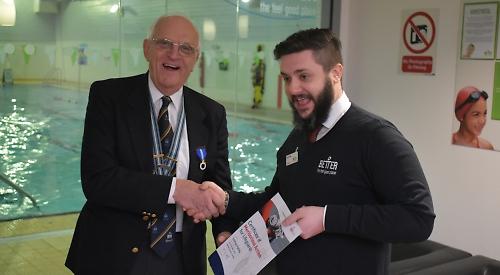 TWO members of staff who saved the life of a squash player at Henley leisure centre have been recognised for their actions.

David Wright collapsed on court during a match and his heart stopped for 10 minutes.

Duty manager Josh Fahey and recreation assistant Liam Peachey gave him CPR and then got his heart restarted using a defibrillator.

Mr Wright, 65, of St Mark’s Road, Henley, was taken by ambulance to the Royal Berkshire Hospital in Reading where he had emergency surgery to deal with a blockage in one of his arteries.

He had a stent put in the artery to keep it open and spent four days in hospital before being discharged.

The men were presented with certificates of meritorious action for lifeguards by Iwan Williams, presidents of the Thames Valley branch of the Royal Life Saving Society UK.

Mr Fahey, 28, from Long Wittenham, said: “I’m proud. It’s something Liam and I can look back on for the rest of our lives and say ‘we did that’.

“It could have gone either way so the fact that the outcome has been positive is amazing. The main reward is seeing David walking in, smiling and happy. It’s just the best feeling to know that if we didn’t do what we did, he wouldn’t be around.”

“David is in good health and that’s all we want — everything else is just a bonus.”

The men were the only staff on duty at the centre in Gillotts Lane when the incident happened.

Mr Wright, who is chairman of Henley Squash Club, was playing the last game of a match against Bounty of Basingstoke when he suddenly collapsed.

Mr Fahey said: “I was on reception and a couple of squash players ran in and said ‘you need to call an ambulance’. I called the ambulance then ran to the squash courts.

“As I went in I could see David in the recovery position. I went up to him and saw that he was unconscious. I checked his breathing. That was the scariest 10 seconds of my life and then the training kicked in. I started CPR and I got two or three of the players to run to the pool and get Liam.”

Mr Peachey fetched the defibrillator, which is kept behind reception.

Mr Fahey said: “I just kept going until Liam had the defibrillator and it said ‘shock required’ and we had to shock David. In between we did CPR.”

Mr Fahey said: “I held David’s hand and kept speaking to him and made sure the squash players went outside to meet the ambulance and show them in.”

Mr Peachey said: “I don’t think I slept that night. We didn’t know what the outcome was until the next day. We knew we had done all that we could.”

Mr Williams said: “They saved a life and that’s why they have got a certificate.”

Mr Wright, a retired vascular surgeon, who is chairman of Henley Squash Club, said he was grateful to the men for acting quickly. He said: “‘I was very happy to see Josh and Liam receive their awards which are very well deserved.

“What they did on that night in October really saved my life and my family and I are truly grateful for their intervention.

“Since my heart attack I have had further treatment at the Royal Berkshire Hospital under the care of Dr Nicos Spyrou, consultant cardiologist, which went well and provided excellent service.”

He had an angiogram followed by further stenting in December.

Mr Wright said: “This has had massive impact on our family and a lot of other people too but I hope it encourages others to get themselves trained and familiar with using CPR and defibrillators.”

In November he returned to the centre to present the pair with a bottle of champagne each, some money and mugs he’d made himself at home bearing his initials.

Centre manager Kevin Williams said: “We’re very proud of the guys and what they did. The impact this has had on the whole has team been unbelievable. It has really focused them and helped deliver a better service.”