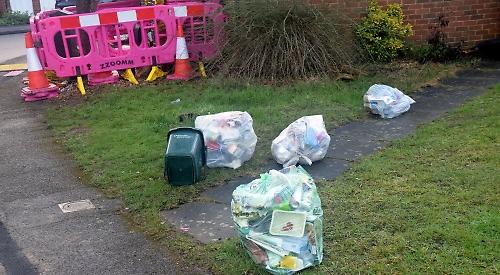 A MAN has complained after contractors installing a new high-speed internet network in Henley dumped piles of rubble in the street.

The team from Zzoomm, which is laying cables underneath every road in the town, left several heaps of aggregate strewn beneath tarpaulins along a 20m section of King James Way.

The material, which was left over from digging up several nearby roads, takes up about one car’s width and has been screened off using plastic barriers.

This has narrowed the street which made it impossible for bin lorries to access King James Way on Wednesday last week.

Zzoomm had warned South Oxfordshire District Council about the blockage so the authority arranged for its contractor Biffa to return on Saturday, when no work was taking place.

Tony Taylor, who lives in Knappe Close, off King James Way, said bin bags left out for collection were blown about by winds the night before and clumps of aggregate were blown across the road.

He said: “I wonder whether Zzoomm submitted a risk assessment for their work, as they claimed before Christmas, and whether this takes waste collections into account?”

The company says it keeps the district council and Oxfordshire County Council, the highways authority, updated on the progress of its work and any disruption it might cause.

Zzoomm has now finished installation work in King James Way and will clear away the rubble before Tuesday, when it is required to do so under a temporary permit from the county council. It also suspended installation work on Wednesday this week to prevent further disruption.

A company spokeswoman said residents were told about the works via a leaflet drop about a month in advance.

She said: “While the build progress can seem like an imposition at times, we’re putting in infrastructure that will benefit residents and businesses in Henley.”

The new network will be available to about 6,800 properties in Henley and will offer download speeds up to 200 times faster than the national average.