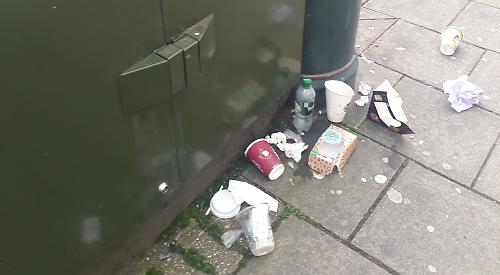 RESIDENTS and business owners in Henley are being encouraged to help keep the streets clean.

Town and community manager Helen Barnett wants shopkeepers to sweep and wash the pavements outside their businesses and for residents to pick up litter wherever they see it.

She says that townsfolk should be working together to make it the best place to live, work and visit rather than complain about it and expect someone else to do it for them.

Ms Barnett said: “This initiative is about encouraging people to take pride in the town and not to just complain about it being dirty and such like.

“There are a number of people in the town who do things already as well as groups who try to make Henley the place people want it to be.

“When you come through town you want to see it looking lovely by making the best of what we have got.

“It is a shame when it is spoiled and this is just as much about education. There are people who walk around the town and step over rubbish. If you see rubbish, don’t step over it, pick it up and put it in the bin.

“We, as a council, are looking at the nuts and bolts of street cleaning and possibly new bins and things that make the place look lovely.”

Ms Barnett, who lives near Nettlebed, said Henley Housekeeping was inspired by Bicester, where civic pride is encouraged.

She said: “There it goes from the top down, from the council’s chief executive downwards. If they see rubbish they do a sweep. The council has adjusted its budget for doing more cleaning and we are looking at people to supply that service and whether we can get a machine to help with that.

“We will be writing to all the retailers here to ask them to get on board.

“This is not a one-person job or a project, it is an initiative that we could all join in.”

Ms Barnett singled out Laurence Menswear and jeweller David Rodger-Sharp, both in Duke Street, and the Stocks boutique and toy shop Bagatelle in Bell Street for taking pride in their shop fronts.

“This is about encouraging everybody to do their bit,” she said.

In November, the Henley Standard reported how the town may not enter this year’s Britain in Bloom competition because councillors said it looked too scruffy.

Kellie Hinton, vice-chairman of Henley in Bloom, said that apart from the hanging baskets not enough was being done to make the town centre attractive.

She said: “Our residents should be littering less and our shopkeepers could take care of their frontages. There are sites in the town that are not pulling their weight. I’m not proud to show it off. It’s completely demoralising.

“We can’t force shops to sweep outside but we need them to have more care in their appearance and for residents to not litter.

“If everyone was doing their bit then I would be absolutely in favour of entering the town — let’s show it off all day long.”

South Oxfordshire District Council provides an annual deep clean in which it sweeps the pavements, removes litter and kills weeds.

In 2013, then Mayor Stefan Gawrysiak called on businesses to clean the streets outside their shops once a week. Twenty-six businesses, including pubs, takeaways and clothes stores, all agreed to support him.