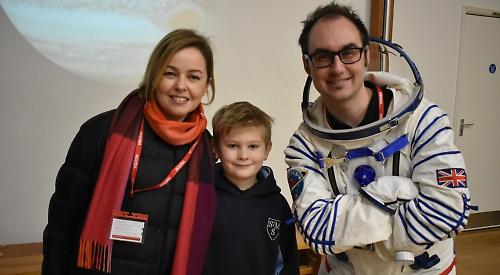 CASSIUS CARTLAND may not look as though he’s about to celebrate his second birthday but, technically speaking, he’s the youngest year three pupil at his school by some way.

That’s because Cassius, who attends St Mary’s School in Henley, was born on February 29, 2012, a leap year.

Most years, he celebrates his big day on March 1.

But as 2020 is another leap year, Cassius will have a special celebration on the correct date with his parents Andy and Kate, sister Marcie, four, and brother Max, six, at their home in Bolney Road, Shiplake.

Mrs Cartland said: “When we found out that we were expecting Cassius the due date was something like March 3 and my mother-in-law said, ‘I’m pretty sure you’ll end up having the baby on leap day’.

“By celebrating on March 1 we feel like he is actually the age he is.

“Because we have always made a big deal of each birthday and had a party, I don’t think he feels like he has missed out.

“When it is a leap year we make sure the party’s extra special.

“The last one in 2016, I don’t think he really realised, but this year he gets it that it is a really exciting birthday. He started asking about his party the day after his last birthday.”

Cassius will celebrate with his friends on a gaming bus as well as trying karaoke.

He said: “If you say I’m two I’m the youngest in my class but if you say I’m seven there are two who are younger than me.”

Cassius’s great uncle Steve Cartland, who lives in Sydney, was also born in a leap year and will celebrate his 18th birthday (actually his 72nd) this year while his late grandfather was born on Christmas Day.

“We have got a number of special birthdays in the family and we email his great uncle,” said Mrs Cartland.

Meanwhile, the independent school in St Andrew’s Road invited scientist Stephen Ringler, the founder and chief executive of the Space Store in Didcot, to speak to the children about the phenomenon of leap years while wearing an astronaut’s suit.

The kindergarten children visited the shop last month and were able to try on space suits and sample the food eaten by astronauts in space.

Mr Ringler, who worked on the Juno satellite, told the children there were about 66 people in Henley born on February 29.

The time it takes for the earth to rotate around the sun is 365 and a quarter days but a calendar year is 365 days.

Therefore, once every four years we have a leap year and an extra day to balance this and ensure the months consistently match up with the four seasons.

If leap years didn’t exist in 700 years the months of December, January and February would become summer, March, April and May would be autumn, June, July and August would be winter and September, October and November would be spring.