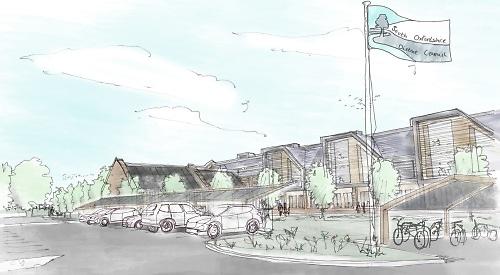 THIS is what South Oxfordshire District Council’s new headquarters could look like.

The authority revealed the designs at a public exhibition last week as it plans to move back to Crowmarsh Gifford by the spring of 2022.

The three-storey building, which could accommodate 435 staff, would be environmentally friendly with solar panels on the roof of the council chamber.

The council’s old offices were destroyed following an arson attack which caused a huge fire in 2015.

The council currently shares a temporary office with Vale of White Horse District Council at Milton Park, near Didcot. The councils share a number of services as well as a chief executive.

Councillor Stefan Gawrysiak, who represents Henley on the council, said the project was “long overdue”, especially as the council was paying £300,000 a year in rent for its temporary base.

He said: “At some point the insurance money that covers the rental will run out.

“Economically, it makes sense to have a new building and move back into the heart of South Oxfordshire. The designs look very good. They include a lot of green features. The orientation of the building in terms of sunlight has been taken into account and the build quality should be of a very high standard.

“We are very enthusiastic about it. Some aspects may change during the tendering process but I would hope fundamentals remain the same.

“This building will be here for 50 to 100 years, so we have got to get it right and maybe spending a little bit more up front will be better in terms of making it more efficient.” More than 300 people attended the exhibition, including council staff, local business figures and members of the public.

“The staff are really looking forward to going back home and they thought it would be a good environment and a nice place to work.”

The next step is for the architects to come back with a final design for approval by the council’s cabinet on March 5.