Near-misses at crossing where boy was hit by car 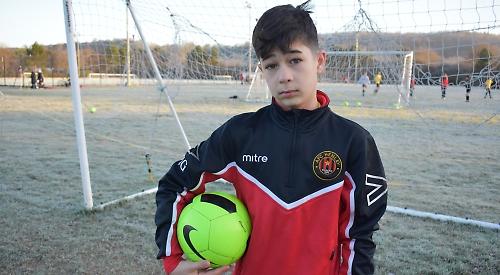 TWO near-misses have taken place at a pedestrian crossing in Henley where a boy was injured in a hit-and-run crash.

Harry Graham, 12, was clipped by a car as he used the zebra crossing on the Tesco entry road last month.

He was on his way to football training with AFC Henley at the Jubilee playing fields when his leg was struck by the wheel of a car which did not stop.

His mother Emma and other campaigners have called for this and other crossings in Henley to be improved before a more serious accident happens.

They say the Tesco crossing has not been properly maintained and is more dangerous for children to use in the dark in winter.

The store is due to repaint the lines and it has replaced the bulbs in the two belisha beacons and cleaned the covers.

The latest incidents happened within two days of each other earlier this month. In one AFC Henley coach Richard Attwood was using the crossing with his son Freddie, 10, to get to the playing fields at about 5.30pm.

A car entering the car park had stopped at the crossing as Freddie was about to cross and another boy jumped out.

“This seemed to anger the chap behind who started beeping,” said Mr Attwood. “Luckily, my son waited for me before he crossed as the angry man decided to swerve round on to the wrong side of the road.

“He saw me but if Freddie hadn’t been with me he may not have stopped in time. This guy was so desperate to get his frozen peas he was willing to risk people on the pedestrian crossing.

“I gave him a piece of my mind and said ‘you’re on the wrong side of the road facing oncoming traffic’.” Mr Attwood, who lives in Reading Road, said the first driver had also been in the wrong. “They shouldn’t have been dropping their kids off there,” he said. “It’s dangerous. That crossing is just so poorly lit, particularly at this time of year. It's just an accident waiting to happen.”

Two days later another driver was leaving the store car park when they had to brake to avoid someone on the crossing.

Mrs Graham, of The Causeway, Caversham, said her son had been “extremely lucky” not to have been more seriously hurt.

He was taken to the Royal Berkshire Hospital in Reading and found to have suffered bruising to his shin.

She said the police had traced the driver, adding: “I don’t think we can take any other action against the driver. It was an accident.

“Harry’s fine now but he still worries about crossing the road. I definitely welcome the repainting of the lines. Tesco said their head office had come down to inspect the crossing and said it was within the safety guidelines and I said ‘no, it’s not’.”

Mrs Graham has also asked Henley Town Council to cut back the hedge near the crossing.

Donna Thomson, whose son Luca, 12, also plays for AFC Henley, has been campaigning to make the Tesco crossing safer.

She says all drivers heading in and out should slow down, take more time to check for pedestrians and be patient when children are crossing.

She wants a large sign saying “children crossing” installed, along with CCTV.

AFC Henley says it has reminded parents to take care when taking their children to and from training and matches.

A spokesman for Tesco said: “We encourage all customers to take great care when driving in our car parks and give way to pedestrians.”