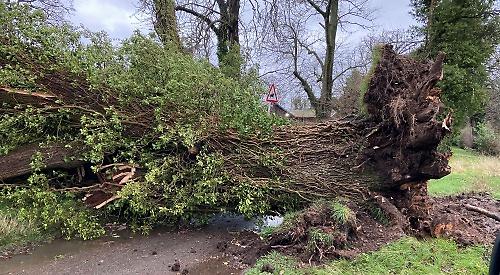 The oak, which was at least 30ft tall and several feet thick, was uprooted and collapsed across Icehouse Lane in Fawley when winds of up to 40mph swept the area on the Saturday before last.

It lay at the bottom of the lane near the junction with Marlow Road for hours before it was cut into pieces and piled up at the roadside by contractors working for Oxfordshire County Council, the highways authority.

The unexpected felling had personal significance for villager Alfred Waller, 82, as his ancestors played a part in its planting in the 18th century.

They had hired Brown to landscape their grounds and recommended his services to the Freemans.

Brown, who later became known as “England’s greatest gardener”, was commissioned by the Freemans to plant most of the oak trees that still line Icehouse Lane, which at the time was part of Fawley Court, and several others at the neighbouring Henley Park estate.

The trees included one on Marlow Road which was cut down by the council amid protest about a decade ago. The authority said it was rotting but opponents disputed this. Mr Waller, 82, learned of the connection between his ancestors and Fawley after he moved to the village more than 30 years ago.

The lineage goes back at least as far as the 1600s, when poet and MP Edmund Waller’s family were living at Hall Barn.

Mr Waller says he was the “biggest toady of his age” as he switched loyalities twice during the Civil War and its aftermath, penning verses in support of Charles I, Oliver Cromwell and Charles II as their respective fortunes changed.

Sir Hardress Waller, another relative, was a judge at Charles I’s trial and signed his death warrant. It was Edmund’s son, also named Edmund, who referred Brown to Sambrooke Freeman and the landscaping was carried out between 1764 and 1766.

Mr Waller, a retired publishing director who is campaigning to revive the former Walnut Tree pub in Fawley, was alerted to the fallen oak by a fellow villager who sent him a photograph of it.

He said: “It’s sad that this wonderful old oak has finally blown down. It was absolutely covered in ivy and I imagine that caught the wind and acted as a sail to pull it down. There certainly wasn’t much sign of rot when I looked at it so I think it was probably healthy.”

He added: “I didn’t realise we had links with Fawley until a historian did some research into the history of the village church. The oaks planted by Brown are magnificent and we were very sad when the county council cut down the other one. We insisted it wasn’t rotten but they’d already done half the job by the time we got there to argue.

“I’m not proud of my ancestor but the family did help to make Fawley an attractive village, which it still is today.”