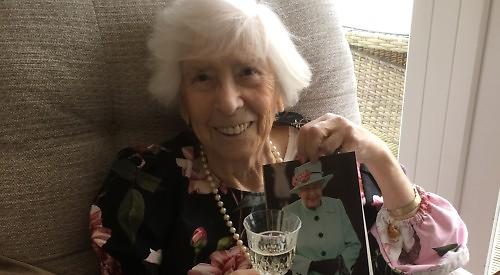 A WOMAN was able to celebrate her 100th birthday despite the restrictions imposed by the coronavirus outbreak.

Peggy Green was joined at the Thamesfield nursing home, off Wargrave Road, Henley, by her daughters Lesley Watts, who also lives in the town, and Sally Jenkins, who was visiting from Dorset with her husband Mike.

Mrs Green’s other daughter Gay, who lives in Leeds, was unable to join them but briefly chatted with her using the FaceTime mobile app.

The family had been due to have a large celebration at Bix Manor but had to call this off in order to observe the new restrictions on social distancing.

They couldn’t meet in any of the home’s communal areas so instead enjoyed a picnic in Mrs Green’s flat, where staff brought them a cake baked specially for the occasion.

On the morning of the party, the centenarian was delighted to receive a congratulatory card from the Queen and another from the Department of Work and Pensions.

Mrs Watts, of Gravel Hill, said: “It was very sad that we had to cancel our original plan because it would have been quite something to get the whole family together.

“However, it’s understandable given what’s going on and despite everything we made the most of it and had a wonderful day. We put up balloons and banners and enjoyed each others’ company.

“The staff were incredibly kind and even sang Happy Birthday for her. Mum absolutely loved it and was particularly overwhelmed by her card from the Queen, which she hadn’t expected.”

Mrs Green, née Spratt was one of five children and grew up in Westcliff-on-Sea, Essex, with her parents Douglas and Sheila. The family moved to Sagamore, a large house off Bolney Road, Shiplake, in 1938 as the family feared the Germans would target the coast if war broke out.

They lived there for four years and would often shelter from bombing raids in a partly-submerged storage shed beside the house. To this day, a record of the bombing runs is scrawled on the wall in pencil, although Mrs Green doesn’t recall who wrote this.

She met her husband Derek, then a major in the Royal Engineers, in the early Forties and they moved to Torquay in 1942, where they were married. Mr Green was an expert on installing and taking down prefabricated “Bailey bridges” and travelled the world training soldiers in their use.

The couple were back in Henley by 1945 and Mr Green and his brothers set up Sidney Green & Sons, later Associated Asphalt, at the Highlands Farm industrial estate off Greys Road. He retired as a director in the early Sixties.

The family lived at various addresses, including Remenham Hill and Wharfe Lane, Henley.

Their children were born between 1944 and 1952 and attended St Mary’s preparatory school in St Andrew’s Road before going to boarding school.

Mrs Green, who was widowed in 1999, did not work but was a keen watercolour painter and exhibited her work at galleries in London and the Henley area.

She was also a member of the town’s flower club and helped to run its NSPCC baby clinics.

She left Henley more than 20 years ago and lived in various locations, including Dorset and Winchester, but returned to be nearer relatives.

Mrs Watts said: “She has always been incredibly creative — art was a big part of her life and she was also very skilled at needlework.

“She’s quite a fidget and loved doing up houses, so she moved around quite a bit before she came back here.

“She has always valued her independence but she understood the need to be nearer people who can look after her, though she’s still in remarkably good health for her age.

“We were glad that she could celebrate her 100th birthday surrounded by the people she loves the most and I was pleased that her card from the Queen left such an impression.”