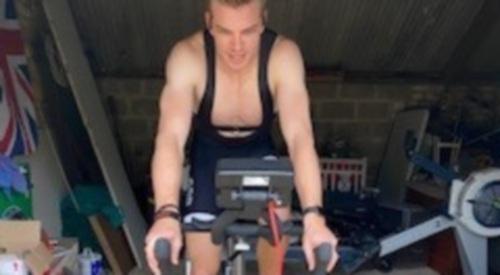 ROWERS who were due to compete at the Olympic Games this summer say they are sad that it has been postponed.

But all agree that it was right to move Tokyo 2020 to next year in the wake of the coronavirus pandemic, which has wiped out all sport across the world.

Leander Club in Henley provided most of the athletes who were due to compete for Great Britain in Japan in the hope of emulating the haul of five medals, including three golds, at Rio 2016.

Now the athletes are in isolation as no training is allowed on the water.

They are all continuing with their health and fitness regimes to ensure they remain in a good physical condition.

Former Leander captain Vicky Thornley, who was due to compete in the single scull, was relieved when the International Olympic Committee made the decision to postpone the Games last week.

Thornley, 32, who lives in Bix, said: “I think we had an idea that it might be coming but once you’re told it might be the case you just want to know for sure.

“As an athlete, you want to know what’s coming, what the timetable is and so you can set goals and make a plan so you can remotivate yourself and get on with the training.

“It was a relief to finally know and the IOC has made completely the right decision and, hopefully, once we are out of this, the Olympics can be something people can look forward to.”

John Collins, 31, of Upton Close, Henley, said: “I was obviously pretty gutted because we all had this very big target in mind that we were aiming towards but now the goalposts have been moved.

“I was upset but it is absolutely the right decision. There was talk of a watered-down Olympics, with no spectators or fewer competitors, but for me that would have detracted from what makes the Olympics great.” Collins came fifth in the double sculls in Rio and is hoping to do better this time around.

He said: “They could have cancelled it altogether, which would have been very bad, particularly as I feel that I have a job still to do, whether that is this July or next July or whenever it is next held.”

Tom George, 25, who lives in Market Place, Henley, is part of the men’s eight and was due to compete in the Olympics for the first time in Japan.

He said: “It is definitely weird and I have mixed emotions about it.

“It is difficult to be told, when you are so close, that you are not going to the Olympics for the first time, but this is a completely unprecedented situation — it could be weeks or months before we are back to normal.

“Everyone is no longer rowing in boats but if it all gets sorted in the next month or six weeks we could find ourselves in the middle of July but there being no racing.

“It would have been a difficult decision to make but it was probably the right one.”

With the Leander athletes unable to train at the club due to strict government advice on travel and social distancing, they have been given individual programmes to follow at home.

Thornley said: “The only thing we can’t do is row on the water.

“At home I have an ergo [rowing machine] and I have some ordered some weights to use. I also go running and ride my bike so I have been mixing it up and, with the weights as well, I will keep getting fitter and stronger.

“I have been treating it like a training camp but at home.

“Training, eating and sleeping, that’s what it is and that’s all you can do. That is my daily routine with rest in between.

“If I don’t have my training I think I would go crazy.

“The first session is the morning. I eat, then a second session, eat again and rest and then a third session in the afternoon and then dinner and bed. It is important to keep that routine.”

Thornley says staying motivated is key and says the athletes are all staying in touch on WhatsApp and social media.

On Monday she did a live ergo session on Instagram, which she hoped others would join in with at home.

“It is hard when you are doing it [training] on your own,” she says. “But for myself, I am in the single scull, so I am on my own a lot of the time anyway so I have learnt a lot about self-motivation.

“I am sure it will get a lot more challenging for me the longer this goes on for. It is hard to get motivated when there is no competition to train towards.”

Collins says while he has a training programme, athletes can do it on their own terms. He said: “I have borrowed a couple of rowing machines and so I’m getting some good mileage on that and, along with the bike, it is a great way of killing time.

“I’m also doing sessions that I wouldn’t normally do as I think it is important to be a fully rounded athlete and that is also a good way of staying mentally fresh.

“I aim to do 20km on the ergo a day and an hour or more on the bike. Some days I do less time but increase the intensity.”

Collins says he is using the break to continue working towards a personal training qualification.

He has also convinced his partner, fellow Leander athlete and Olympian Karen Bennett, to watch Sons of Anarchy in their leisure time.

George has moved back in with his parents in Gloucestershire for the time being where he continues to train.

He said: “We have a programme of one ergo session a day and weights so as a group we can keep moving in the right direction but there is flexibility to it.

“There are some things you can’t replicate while running or on a bike so you have to spend more time on the ergo but they [the coaches] are very happy if you wanted to go on the bike for say an hour.”

George says he is also using the time to relax.

“I am totally getting into Netflix at the moment,” he said. “I have brought my PlayStation and I have also got a number of books I want to read. I am currently reading The Tattooist of Auschwitz, which I am enjoying.

“If the travel restrictions are relaxed, I will look to come back to Henley in the next four weeks or so.

“I think my parents are happy to have me back, apart from the amount of food I am eating.”

Mark Banks, Leander’s director of rowing and chief coach, said postponing the Olympics was inevitable but the coaches are in daily contact with the athletes.

He said: “The postponement was the right thing to do.

“Although it is incredibly disappointing for the athletes — they will be gutted, especially those who would have gone there for the first time — they will also understand that the most important thing is people’s health.

“From a coach’s perspective, we have to adapt what we are doing. The athletes will have different training programmes but rather than everyone following the same plan, they will be tailored to the individual so they can work on their weaknesses, which they don’t normally get the opportunity to do because we are a team sport.

“The athletes will be contacted on a daily basis by the coaches and hopefully they can make the most of it so we can come out of this positively.

“I trust them all completely to follow their programme. They don’t get paid, they do it because they love their sport, they love training and they want to fulfil their potential.”

Last week, Henley Royal Regatta, which was due to take place from July 1 to 5, became the latest international sports event to be axed due to the covid-19 pandemic and concerns for the health, safety and wellbeing of competitors, staff and spectators.

Mr Banks said that, like the Olympics, it was obvious the event couldn’t go ahead but praised the regatta’s committee of management for making its decision quickly.

He said: “Cancellation was inevitable but what was really pleasing is they didn’t procrastinate and wait and wait so the athletes were not under pressure to train and they should be applauded for that.”