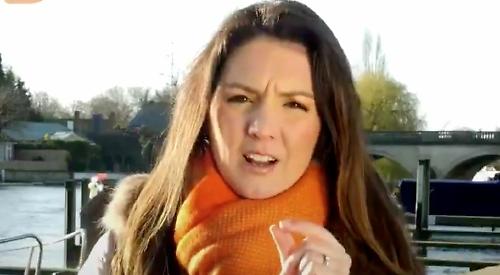 PIERS MORGAN has defended his Good Morning Britain colleague Laura Tobin after she delivered a series of weather reports live from Henley.

The breakfast show presenter said the meteorologist lived near the town so it was safer than her having to drive to work.

Mr Morgan also said that she and the rest of the Good Morning Britain team were journalists and therefore classed as key workers.

Tobin was filmed live during Tuesday’s show on three occasions, with Henley Bridge behind her during her final report.

Morgan and
co-presenter Susanna Reid had spent much of the show discussing the importance of social
distancing.

One of the main news items was the role of the police in ensuring residents obey the Government’s lockdown advice.

They also interviewed Grant Shapps, the Transport Secretary, on the subject of essential travel and key workers.

This led to a number of viewers criticising Tobin for delivering the weather report from Henley instead of the studio or her home.

Marcus Stead wrote on Twitter: “Was it really necessary to send Laura Tobin to Henley-on-Thames this morning? That would’ve involved an OB [outside broadcasting] truck and several staff.

“And for what? So we can see a few trees and a river backdrop? Why couldn’t she have presented the weather from the studio? An essential journey?”

Elizabeth Shaw added: “Would Piers Morgan, who berates everyone for making unnecessary journeys, please explain why it is necessary for Laura Tobin to deliver the weather report from Henley-on-Thames? Does she live there? Does the film crew?”

Morgan addressed the criticism during the show, saying: “We are getting a few people saying why have you got reporters out there on location.

“Why is Laura, our weather girl in Henley? Because it is near her home. It avoids her spending an hour driving in to be here and filling up the studio, which perhaps would be a higher risk.

“These things, we haven’t just done these casually. The show itself is classified a news show and so we do think very carefully about the division of labour and who goes where and why they’re doing it. The Government has decided we are essential workers and we are imparting information to you.”

Reid returned to presenting duties having self-isolated for 14 days when one of her children presented with symptoms linked to the virus.

She said: “We are a key public information service and I hope we are also doing our bit to lift your spirits.”

Tobin did not address the criticism from viewers but delivered her weather reports on Wednesday from her home.