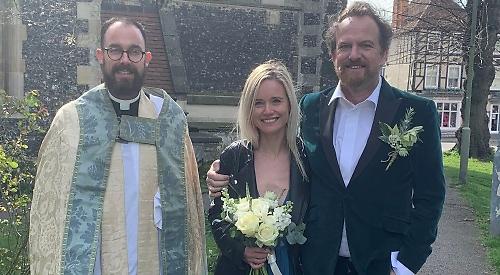 A COUPLE rescheduled their wedding at the last minute to ensure they were married before the coronavirus outbreak shut the country down.

Stevie Madeley and Emma Wallace, who have now adopted the surname Wallace-Madeley, tied the knot at St Mary’s Church in Henley.

The ceremony, which was the last to take place at the church before it closed to the public, was conducted by Rev Jeremy Tayler, the rector of Henley with Remenham, with only Mrs Wallace-Madeley’s brother Jacob present as both a witness and best man.

The couple had been due to marry on June 20 in front of more than 70 guests and then hold a reception at Hotel du Vin in New Street but had to call this off as months of disruption are now expected.

However, they wanted to marry as soon as possible because Mr Wallace-Madeley, 53, has a health condition so asked if they could bring the proceedings forward.

This required a special licence from the Church of England as the couple’s banns had not yet been read in public, which is a legal requirement except in extenuating circumstances.

Rev Tayler arranged this jointly with Rev Sally Lynch, of St Luke’s Church in Maidenhead, who liaised with the Diocese of Oxford’s legal department.

The couple, who live in King’s Road, Henley, had already purchased their rings and Mr Wallace-Madeley had bought his suit. His wife’s wedding dress was still being altered so she wore a formal dress she previously wore to Henley Royal Regatta and the Henley Festival.

Mrs Wallace-Madeley, 34, entered the church to Wagner’s Bridal Chorus and the couple left the church to Handel’s The Arrival of the Queen of Sheba.

The best man recorded the event on video and took photos which he uploaded to Instagram and other social media sites straight afterwards for relatives to see.

The couple then went straight home because no bars or restaurants were open but they enjoyed a celebratory lunch the next day with food provided by Mrs Wallace-Madeley’s work colleagues.

They plan to renew their vows at St Mary’s next year, which will be their “proper” wedding, followed by a reception and honeymoon.

Mr Wallace-Madeley said: “As recently as a month ago it looked like the venue might still be available but the situation was changing so quickly that we wanted to ensure we were married before it wasn’t an option any longer.

“There was a lot of administration to get through and we weren’t sure whether it would all be completed in time but we got the licence at 4pm on the night beforehand, which was very exciting and a real relief.

“We were very humbled that the church pulled out all the stops for us because it can take longer and it wasn’t guaranteed that we’d be successful. They were very kind and we’re so appreciative.

“In many ways the service was more intense because we didn’t have to think about looking after guests or anything to do with the reception. It was very much focused on us and the marriage vows.

“It was a lovely day and we had lots of smiles and congratulations from passers-by as we were making our way to the church.

“I think it cheered up a lot of people with all the worrying news that’s happening at the moment.

“There was plenty of video and I think it was particularly pleasing for my aunt and uncle in Dorset, who are in their Eighties and can’t go out at the moment.”

The couple have lived in the area all their lives. Mr Wallace-Madeley, who grew up in Mapledurham and attended Highdown School in Emmer Green, is a company director while his wife, who went to Gillotts School in Henley, works as a chocolatier at Gorvett & Stone in Duke Street.

They got together about a year ago when they began chatting at Caffé Nero in Bell Street, Henley, and found they shared a love of travel, music and films.

Mr Wallace-Madeley proposed last July while on a trip to Rosmead Gardens in Notting Hill, which featured in the film of the same name.

The site is private so, like the characters in the romantic comedy, which they are both fans of, they had to sneak over a gate before Mr Wallace-Madeley popped the question. He said: “When we renew our vows it’ll be a full wedding apart from the fact that we’re already legally married.

“We’ll ask Father Jeremy to give the blessing as he has been really lovely through all of this.

“We were going to have a honeymoon in Mykonos but that’s not happening now. I’m sure Henley will be just as nice in the summer when the restrictions have hopefully been lifted.

“We’ve always hung out in London so it’ll also be great to go back to the garden in Notting Hill once we’re allowed to travel again.”

Rev Tayler said: “They got there in the nick of time as getting a licence isn’t totally straightforward but the diocese’s legal team rose to the occasion. It wouldn’t have gone ahead if it had taken any longer.

“As an organisation, the wheels of the church can sometimes turn slowly but it can turn things round in a hurry when the chips are down.

“The ceremony was really poignant and meaningful because it was stripped down to the bare essentials. Everything took on more significance.

“It’s a shame that fewer people don’t realise how simple a wedding can be. I think more would get married if they didn’t feel it had to be an expensive Hollywood-style event.

“You only need a priest and two witnesses and don’t have to invite thousands of people, hire a big stately home or have a big party afterwards.”