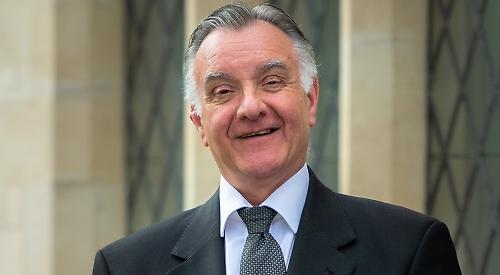 A FUNERAL director has retired after almost 20 years.

Geoffrey Orme, 65, joined Tomalin & Son in Reading Road, Henley, as a funeral operative in May 2000.

He admits that after his first two weeks in the business he didn’t think the job was for him and that he would look for work elsewhere but then he soon settled in.

Mr Orme, who lives on Remenham Hill, was promoted to funeral director in 2008.

His duties included cleaning the hearses, liaising with families to decide what type of funeral they would like for their loved one and putting together an order of service.

He decided at the end of 2019 that he would retire after his 65th birthday, which was last month, and tendered his resignation at the beginning of the year. His final day was two week ago.

Mr Orme said he took pride and satisfaction in helping families at what was an upsetting and emotional time for them. He said: “You’re meeting families from the moment they have had this bereavement. You get to meet some really lovely families and sometimes talking about the person who had died would make people laugh more than cry because they were remembering happier times.

“We were doing a serious job but always had the deceased uppermost in your conversation. I can honestly say I loved every minute of it.”

Mr Orme joined the firm having previously worked for Dickie Gothard, technical, medical and scientific booksellers, which was located on the corner of Queen Street and Station Road, for 28 years.

He said: “When Dickie died it was just about when the internet was becoming big and companies could start buying their books and journals online so his executor decided to close the company.

“It meant we could all leave with a bit of money in our pockets.

“I still had a mortgage to pay so I needed to find a full-time job and Tomalins were advertising at the time. It was a complete change but I thought, ‘well I’m going to give it a go and see how I get on’.

“It was a surprise to me and a lot of others around me at the time because I would have said I was quite a squeamish person but when you start dealing with the things we had to deal with you get over it.

“I enjoy it so much. Okay, cleaning cars isn’t always fun, especially when it’s cold, but I know it’s a vital part of the job because you can’t have the cars going out looking dirty.

“If my colleagues had done a good funeral and the cars were dirty that’s what people will remember.

“We would get to meet the family from day one and we would be with them right the way through to the funeral and would get to know them and guide and advise them where necessary.”

Mr Orme said now was the right time to retire. “I’d like a bit of ‘me’ time,” he explained. “I’ve done 28 years in one job and nearly 20 in another and if I’m lucky enough to have another 25 years that will take me into my eighties.”

Mr Orme said he would like to travel and visit Norfolk as well as visit the theatre, one of his favourite pastimes.

Bruce and Claire Jones, who own the company, bade him farewell with a retirement party held at Christ Church United Reformed Church, next door to the business.

The afternoon tea was attended by Mr Orme’s colleagues, including many local ministers, church personnel, celebrants and mortuary and crematorium staff.

He was presented with a £500 theatre token gift card and a year’s membership of the National Trust.

Mr Jones said: “Geoffrey will be missed by his friends and colleagues at the business and we wish him all the best for his retirement.”

Kris Phillips, who has worked for Tomalin & Son for more than 10 years, will be promoted to funeral director.