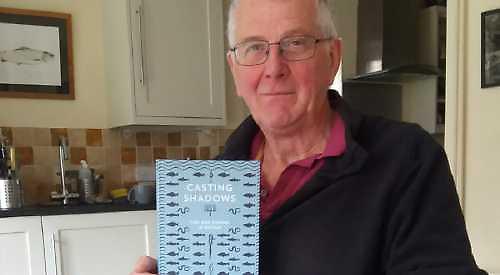 A WRITER from Sonning Common has published a social history of angling.

Casting Shadows: Fish and Fishing in Britain is the 11th book by Tom Fort, who has been a keen angler since childhood.

The 68-year-old former BBC journalist has previously written books about angling, lawns, weather and the A303 road.

His latest volume features passages about his experience growing up in Twyford and fishing on the River Loddon with his two older brothers.

It explains the evolution of freshwater fishing on the nation’s rivers and streams from Neolithic traps and Roman nets to the modern rod and reel.

Mr Fort ends with a call to protect the waters from the “evils” of industrial fishing and farming, which damages river beds.

He describes angling as an “escape” and “a means to nourish, even heal, the inner self”. Mr Fort, who is a Sonning Common parish councillor, said: “I have written this because of my passion for, interest in and desire to know more about rivers and the creatures that live in them.

“I have written a lot about fishing over the years. I was fishing correspondent at the Financial Times for many years. I did a column and as a result of that I wrote for various fishing magazines.

“I have become more and more curious about rivers and lakes, but mostly rivers, and the ecosystems contained within them.

“I’m interested in how the fish, insects, weeds and water come together to form this deeply fascinating hidden world. The fact it’s hidden is critically important.

“Whenever I walk by a river I try to look into it and work out what might be happening. In our world fish get a very little look-in in the wildlife debate. We are obsessed with mammals and furry creatures. We can see them, that’s the point.

“But anglers are the people who look after the waters and campaign to keep them healthy and clean and try to fight against pollution and the degradation of our waters.”

Mr Fort, who lives in Wood Lane with his wife Helen, 57, a BBC radio editor, and daughters Rosie, 19, and Katie, 17, said the book took him about three years to research and write and he travelled across Britain.

He visited Sheffield, where he learnt about the development of working class angling and its popularity as a sport. He discovered how 19th century factory workers would take a train out of the industrial city centre to fish in rivers that were not polluted by sewage and other waste like the Don.

He said: “The men were working in the factories and living in appalling slums but retained this longing to be in the clean, open countryside. It was a huge part of working class leisure life. It was very interesting to research.”

Mr Fort said the Don was now much cleaner because factories no longer polluted it and there was no sewage contamination. In recent years, this had resulted in salmon migrating through it to spawn.

After completing his research, he wrote to a set routine, getting up at about 4.30am and writing all morning, except for a break for breakfast. “Writing about fishing is the next best thing to fishing,” said Mr Fort. “Generally, the earlier the better.”

In the afternoon he would do other things unless he felt it was important to finish a passage or make corrections.

The book is illustrated with numerous drawings, prints and photographs and includes information about fishing near Henley.

Mr Fort said: “Because I was brought up in Twyford and did lots of fishing around here, the Thames is one of the themes of my personal fishing journey. I wrote about how I started to get into it with my brothers.”

The book was praised by veteran journalist Sir Max Hastings in a Sunday Times review which called Mr Fort a “master fisherman”.

The former Telegraph editor said: “This is a splendid book for fish fanciers. From who else save Fort might one learn that favoured baits for his beloved chub include bullock’s brains, rabbit’s guts and the pith from an ox’s backbone? Although I have no plans to trial them, I bet the author has done so.”

Mr Fort enjoyed the praise, saying: “I floated for a while and then came back down to earth. It is hard to float for long in the current situation but it was very heartening.”

• Casting Shadows: Fish and Fishing in Britain is published by William Collins and costs £20 in hardback and £12.99 as an ebook.