Our columnist Vincent is engaged... naturally 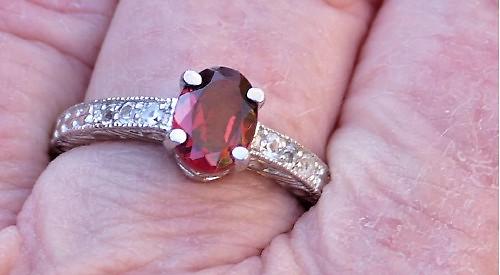 I AM delighted to announce the engagement of the Henley Standard’s Nature Notes columnist Vincent Ruane and reader Rosemary Henderson.

It comes only months after the paper put the two of them in touch.

Rosemary, a talented photographer from Caversham, wrote a letter to the editor in late October with a P.S. asking: “Could you lend me your Nature Notes columnist Vincent Ruane to identify birds in photos I have taken?”

The editor then asked Vincent to make contact, which he did.

Vincent, who also lives in Caversham, recalls: “We agreed that I’d call round to look at her photos.

“I duly rang her doorbell. When she opened the front door something inside me said, ‘Hello, ding-dong’!

“I identified the birds in her superb photographs and she showed me around her garden, which I mentioned in my column.

“We immediately agreed to go out for walks together, having hit it off in a flash.

“On our first venture we had a wonderful time and had lunch in the Flower Pot at Aston. We quickly discovered how much we had in common and I immediately knew that we really, really liked each other.

“As the weeks went by and we spent more and more time together, we became an item. I knew that I was smitten.

“We spent Christmas day at my sister’s with mum and Boxing Day at mum’s. When Rosemary had to leave, we kissed outside and she said, ‘You know this is inevitable?’ I said that I knew. The rest is history.”

He adds: “By the way, when I asked her to marry me she didn't hesitate to say ‘yes’.”

As readers of Vincent’s excellent column will know, it is now illustrated by Rosemary’s wonderful pictures.

I hope you will want to join me in wishing the happy couple warmest congratulations.