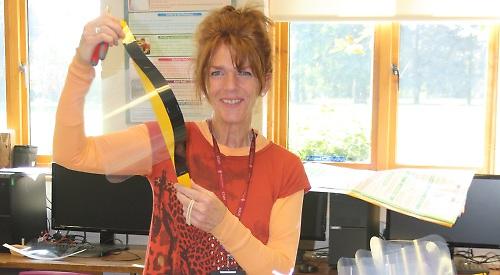 STAFF and pupils at Shiplake College are making plastic face shields to protect doctors and nurses who are treating coronavirus patients.

A small team of volunteers is using the independent school’s design technology laboratory to produce more than 100 devices every day.

The shields comprise a clear, curved plastic sheet which covers the entire face and a band which goes across the forehead to hold it in place.

They have gone to a number of GP surgeries in Oxfordshire, Berkshire and Buckinghamshire as well as the Royal Berkshire Hospital in Reading.

The team is led by DT teachers Mike Whitfield, Tom Bayley and Sally Satch, whose daughter-in-law Zara Milne is a doctor in the acute care unit at the Royal Berks.

Also taking part are year 12 pupils Poppy Whitfield and Laura Pasmore, the daughter of school registrar Esther Pasmore, and her younger brother Tommy, who attends Highdown School and Sixth Form Centre in Emmer Green. About a dozen others are taking part on a rota basis.

The project was inspired by the school’s links with Dr Milne and Rachel Crisford, the wife of lower school head Tom Crisford, who is a senior nurse at the intensive care unit at the Royal Berks, which has been divided into two sections, one for treating only covid-19 sufferers and the other handling other cases.

The school has so far delivered 60 shields to GP surgeries and 120 to the hospital and intend to keep going.

They have also donated sterile aprons and gloves from the school’s medical centre, which is now out of use as pupils are being taught from home.

Katherine Green, the school’s public relations director , said: “We realised we had some spare capacity and wanted to help because we’d heard reports of a shortage of protective equipment.

“Having colleagues with loved ones at the frontline of the crisis was also a factor as they were telling us how incredibly useful any contribition, however small, would be.

“We ordered the materials and while we waited for them to arrive we managed to source some from Leighton Park School in Reading, for which we’re thankful as it allowed us to start production sooner.

“We were forced to think quickly when the laser cutter broke but fortunately we’ve found a manual method which anybody can follow, not just those with specialist experience.

“It’s an entirely worthwhile effort and we will continue production for as long as it’s needed. We have enough helpers that we can operate on a daily basis and may get in touch with local care homes to ask if we can help them too.

“We’re limited by social distancing regulations and the need to keep cleaning our work areas but there’s no shortage of goodwill among our community. The surgeries and the hospital are grateful that we’re helping to protect them as they work tirelessly to save lives.

“It’s the least we can do because it’s easy to feel hopeless in this situation and any steps we can take, however small, will mean an awful lot.”

Ms Satch said: “I have so much respect and love for everybody working in the health service because, at a time like this, they’re putting themselves at risk and making a huge sacrifice.

“It’s a bit quieter for Zara in the ACU because the biggest priority is covid-19 patients but everyone is working long shifts so it’s really full-on.

“It’s great to feel you’re doing something, even if it’s just a fraction of what’s needed.”

Mrs Crisford, from Caversham Park, said: “We’re extremely grateful that the college community is taking the time to make these visors for everyone in our unit.

“We’re working incredibly hard to save some very, very sick people and any contributions are greatly appreciated.

“We’ve had so many donations from across the region, from Easter eggs and PPE to meals and hand- creams.

“My colleagues and I are all appreciative because our job is so much easier when we know that the community is behind us.

“This has been a very tough time but I work with a fantastic team and we’ve all pulled together since the beginning so we’re much closer as a result.”

Last month the DT department at the Oratory School in Woodcote began producing masks for medical staff and also installed protective plastic screens at the front desks of Goring and Woodcote GP surgeries.