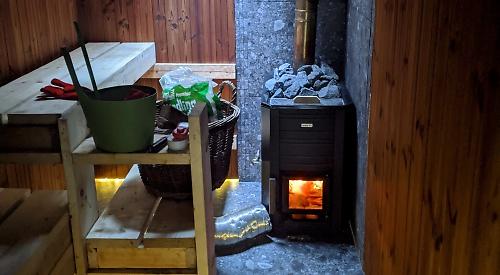 A STUDENT from Henley has spent £4,000 turning a Second World War bunker into a homemade sauna.

Jonny Warby came across the old air raid shelter hidden by overgrown bracken and shrubs when his family first moved to their home in Rotherfield Road in 2003.

The 26-year-old initially used it to brew beer but this proved impractical. Then last year he thought about creating a DIY sauna.

He finally started work on the project in November when he bought a wood-burning stove to heat up the room and made some benches from recycled wood.

However, the sauna was not reaching the optimum temperature so he invested more money in ensuring the old bunker was properly insulated.

Jonny said: “I started off trying to do it somewhat cheaply. It was about £1,500 in total and I was quite happy with that.

“If you asked a company to do that for you, you would expect to pay £10,000. I bought a really powerful wood-burning stove to heat up the room and I thought if I did that, I wouldn’t have to do insulation and it would just get hot enough but it didn’t.

“In Finland, they normally have saunas between 80 and 95 degrees, but with low humidity.

“The first time I did it, it was getting up to about 50 degrees, but after all the insulation and additions it is getting up to 85, which is very hot and very nice.

“I have put a lot of man hours into it and labour is at least half the price it would have cost, but I am very happy with how it looks — it’s a lot fancier.”

The building is partly underground and has a set of steps down into it.

Jonny, who is studying for a PhD in physics at Oxford University, having previously studied chemistry at Durham, is back at home with his parents Jane and Adam due to the coronavirus pandemic
lockdown.

His sisters Lucy, 29, who works in finance, and Emma, 30, who is a lawyer, both live in London. He and his family have carried out a number of alterations to the shelter over the years to include electricity and remove an old escape hatch.

But it was a Durham University friend, Jake Newport, who  prompted Jonny’s idea of a sauna.

He was helped by his girlfriend, Emma Carrick-Smith, from Dorset, who is staying with the Warby family during the lockdown.

Jonny said: “I am a very hands-on guy. I bake bread, I brew beer in my free time as well and I am very much into carpentry and making things.

“I thought it would be a good man cave for my brewing but it ended up not being ideal because it was too humid.

“I took all the brewing stuff out and it was just sitting there not being used and that was when I had the brainwave for the sauna.

“I saw my friend Jake’s sauna a few months beforehand and it was really good.

“He runs a business called Finnmark Sauna and they are quite big in the UK. He provided me with all the materials.” Jonny says he loves the feeling of jumping into cold water immediately after a session in the sauna.

“That’s is my favourite part of it,” he said. “I do like cold water swimming as well.

“You can immediately go back into the sauna, so it is just a brief shock to the system and it really gets the endorphins going and you feel like you have run a marathon after a couple of times of doing it.”

The family lived in America for seven years and were based in Seattle and Chicago due to Mr Warby’s work commitments.

Before that, the family lived in St Mark’s Road, Henley.

Jonny has shared images of his project with friends but none of them has been able to test the sauna due to the lockdown.

He says his parents plan to invite their friends over to use it when the restrictions are lifted.

Jonny hopes to specialise in renewable energy, such as solar panels, when he returns to his studies at Oxford.