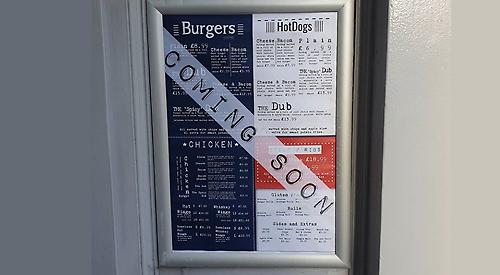 THE opening of a new restaurant in Henley is to be delayed by the coronavirus pandemic.

Mathew Bromwell had hoped to open The Dub, an American-style diner with a British twist, in Market Place in May but has been unable to complete the refurbishment due to a lack of supplies and available workers.

The diner will replace Mezo, a Mediterranean restaurant which opened in August 2018 and closed in September last year.

Before that, it was an Italian restaurant called Da Luca, which was there for about two years.

Mr Bromwell, 41, from Winnersh, said: “It has taken me about 18 months to find a location. I got a really good vibe off it when I first saw it.

“This is the first restaurant I have taken on and I was looking to open at the beginning of May.

“It has been a long slog just to get this far and then the Government says you can’t open.

“I can’t even finish painting the restaurant because there is no supply available. I placed the order for all of the carpets to go down on the same day that the lockdown happened. It is in the lap of the gods at the moment. I need specialists to come in to replace the kitchen floor. I can’t open up until the kitchen is sorted.

Mr Bromwell came up with name of the restaurant by combining the words “diner” and “pub” and says it will be furnished to resemble a traditional English pub.

The business will employ four people, including the chef, and will serve burgers, hot dogs, chicken wings, steak and ribs.

Mr Bromwell, who worked as a chef when he was 21 but then opted for a career in engineering as it was more lucrative, said: “Henley really doesn’t have anywhere like this.

“There aren’t any fast food places like McDonalds or KFC. It is going to be quick and easy food that I hope will be delicious. All the sauces and burgers will be made in-house and the only thing we will buy in are the rolls and beef hot dogs.”

He said he was inspired by a visit to his cousins in Philadelphia several years ago.

He said: “Some of the food I was eating you couldn’t get over here and I thought ‘why not?’ You have to go to London or to a specialist place to get it.

“I realise that you can’t just have burgers and hot dogs and you do have to have a little bit of flair, so we will have an a la carte menu as well.”

The majority of the items on the menu will be gluten-free as Mr Bromwell found out he had a gluten intolerance three years ago.

He said was he looking forward to the lockdown rules being lifted.

“The trouble is, we don’t know how long this will go on for,” said Mr Bromwell. “Although the running costs are not huge, they start to mount up and that is difficult when you are not able to trade.

“What worries me is that they might lift the ban but people will still be wary about going into places.”

Helen Barnett, Henley’s town and community manager, said: “It will be lovely to have that unit open and trading.

“The good thing about an American diner menu is there is nothing like that in Henley. This will be a welcome addition to our already diverse offering.

“We will have to wait and see what happens with the lockdown but it is encouraging that people are looking to Henley as an attractive place.”

Meanwhile, fine dining restaurant Crockers, which was supposed to open in Market Place on Monday, has also been delayed because of the virus.

It has replaced the Loch Fyne seafood restaurant, which had been there for nearly 20 years, and has been running a takeaway service.

Chief executive Luke Garnsworthy said: “ I have five staff living on site and we started the takeaway two weeks ago. They are an incredible team of people and they are all cracking on and making the best of a bad situation.

“Henley is just an amazing town and the response we’ve had during this period has confirmed that. When we do open the doors, people will already have a good idea of what we are about.”