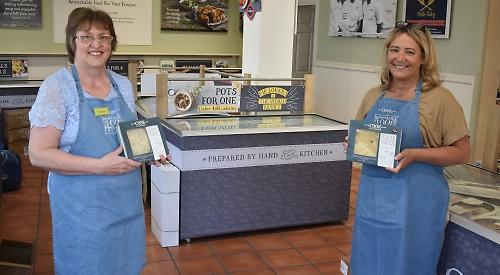 A SHOP in Henley has given away hundreds of frozen meals free to elderly and vulnerable residents as well as NHS workers.

Cook, a national chain with a branch on the corner of Duke Street and Friday Street, wants to give away 100,000 meals nationwide.

It began by offering three free meals to those who were vulnerable and self-isolating as the country went into lockdown more than a month ago but then expanded.

Melanie Jones, who manages the Henley shop, said: “It’s for the people who can’t get out, who are on their own, who are frightened of coming out and who have underlying health problems.” The shop is supporting the Henley Covid-19 Mutual Aid Group as well as another in Nettlebed by giving them meals to distribute to residents.

It also provides free meals to NHS workers who visit the shop to collect food and has made deliveries to Townlands Memorial Hospital, the Hart and Bell surgeries in York Road and paramedics based at the Royal Berkshire Hospital in Reading.

Mrs Jones, who lives in Shiplake, said Deputy Mayor David Eggleton collected meals twice a week to deliver, while other volunteers were visiting homes around the town to ensure the elderly and vulnerable had enough food.

The shop also does home deliveries, some of which are made by Mrs Jones and her colleague Lauren Noakes.

Deliveries have been made to Henley, Goring, Frieth, Whitchurch, Caversham and as far as Pangbourne, Woodley, Earley and Reading.

Mrs Jones said: “We do 60 drops a week. We have a driver who comes from Lightwater and we prioritise elderly and vulnerable people. I think it’s second nature to just go out and help them.

“It’s very rewarding and it makes you realise how people are struggling. You see so many people who haven’t got relatives nearby or any to help them so they are on their own and it’s heartbreaking.

“To give them a few Cook meals to make them happy, I think is amazing.

“Everyone is so grateful and just to see them happy is wonderful. I took a delivery to a lady in Goring who’s 96 and has got leukaemia and she burst into tears.

“We had a nurse and gentleman who both work at Wycombe Hospital come in. He emailed and said he was so overwhelmed that he burst into tears when he got home.”