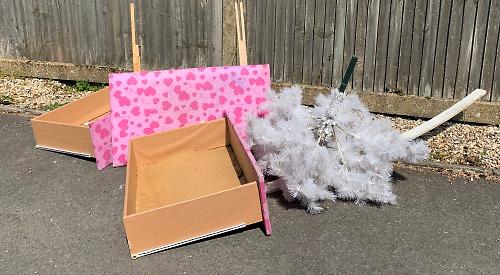 AN artificial Christmas tree was among waste fly-tipped in the car park of Sonning Common Health Centre.

The rubbish, which also included a bed headboard and two drawers, was dumped over the weekend of April 18 and 19.

Staff had to carry the waste to the centre’s bins when they arrived for work on the Monday morning and it has since been collected by South Oxfordshire District Council.

Last month, there were reports of an increase in fly-tipping following the closure of municipal tips due to the coronavirus lockdown.

Dr Ralph Drury, who has worked at the Wood Lane practice for 20 years, said: “Our car park is L-shaped and the fly-tippers just chucked it around the corner where nobody could really see.

“I was a bit downhearted because of the extra hassle involved for our staff, especially in this climate. We have enough to worry about without having to deal with other people’s trash.

“Fly-tipping is a bit of scourge. It seems to be getting worse since the dumps shut and as people are stuck at home a lot of them are probably clearing out the house. That’s probably creating more waste.

“I’m sure farmers, landowners and the council feel like that. It must be a complete nightmare.”

Dr Drury, 52, who is a partner at the centre, said an old mattress had been dumped in the car park previously.

“It’s disrespectful,” he said. “They have obviously got no regard for the health centre.”

Meanwhile, the centre has introduced a number of measures to protect its staff and patients during the pandemic. Some staff are working from home and most GP appointments are by telephone.

Dr Drury said: “We’re trying to respect social distancing but we’re fully open and all working very hard to keep consultations going. Our dispensary is working hard and nurses are still seeing people and bloods are being taken.

“We’re trying to minimise footfall but we’re worried about our frail and vulnerable patients and those patients being sheltered who may not be coming to see us because they’re frightened of coming out.

“We’re open and I think a lot of people have been very scared, understandably, because covid is about.

“It’s a totally different way of working and I don’t think that will change for the next six months to a year until there’s a vaccine.

“Our patients are being fantastic and they’re really supportive. On our side we’re also trying to provide as good a service as possible and to keep going. The receptionists are doing a brilliant job.”