Boy with Asperger’s cycling 100 miles around village for NHS 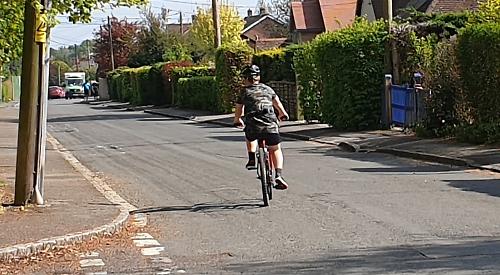 A BOY with Asperger’s syndrome is cycling in and around his village to raise money for the NHS, writes Axel Fithen.

Henry Cook, 12, of Peppard Road, Sonning Common, is spending his daily exercise period riding about 10 miles on his mountain bike.

He is using a phone app to measure his daily distance and hopes to complete a total of 100 miles by Monday.

He has set up a JustGiving page so people can make a donation for health service staff working during the coronavirus pandemic. His target is £500 and he has already raised more than £300.

Henry, who lives with his mother Jules, 44, sister Freya, 14, and brother Reuben, nine, was inspired by Captain Tom Moore, 100, who raised more than £29 million for the NHS by walking round his garden 100 times. He said: “It has been boiling hot and it’s a bit tiring having to cycle up hills but I like cycling a lot. I just like the feeling of doing it and the thrill. It lets me do stuff that I want on my own without anyone else. I’m so bored of lockdown because I’m stuck inside. I also have siblings and they’re quite annoying.

“My mum feels happy and pleased and my dad is proud. My grandparents are also proud. They donated £50.”

He said villagers wave to him during his rides, which gives him encouragement.

Ms Cook, who works for Reading Arts, said: “He likes it and it’s exercise he can cope with. It gives him that little bit of head space. He’s also benefiting from seeing people around and about. I think that helps him.

“Like the rest of us, he’s quite keen for the lockdown to be all over. He’s doing okay and we’re doing various projects around the house to keep busy. He’s currently helping to build a skate ramp in the garden. He also cooks, does DIY and creates and builds stuff.

“The NHS is very much in the public eye at the moment and that’s what he has responded to. I’m proud of him.

“He’s very much the kind of child that once he says he will do something he is determined to do it. It’s nice to see him having a purpose each day.”

In September Henry raised more than £400 for Macmillan Cancer Support by holding a coffee morning for friends, family and teachers from Path Hill Outdoors. He attends the alternative education provider in Goring Heath, which supports children who struggle in traditional schooling.

He has previously raised about £200 for the National Autistic Society by running a cake sale from his driveway.