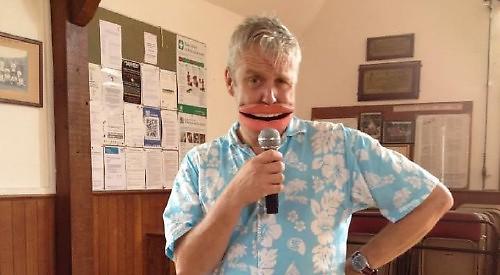 A CHILDREN’S entertainer has written a song to capture the frustrations of the coronavirus pandemic.

Darren Hillier, of Bradley Road, Nuffield, has changed the lyrics of Billy Joel’s classic We Didn’t Start The Fire to reflect the lockdown in The Isolation Song.

The 53-year-old is more commonly known as Bertie Slippers, which is the persona he adopts when he performs for children.

He has had all his bookings cancelled due to the virus so has been trying to keep busy and is using music as a form of escapism.

Mr Hillier was walking his rescue dogs, Trixy and Cookie, in Nettlebed when he had the inspiration for the song.

He took more than an hour to come up with the new lyrics and he then recorded himself singing it and playing the ukulele.

Mr Hillier said: “It is all about the trials and travails of being a family in isolation. It is based on the old Billy Joel song but reflects everything that is going on now.

“That song was all about disasters and it just seemed to apply to the way things are now. You see all these conspiracy theories online and you think ‘has the whole world gone mad?’

“I put the video on Facebook and within a couple of days it had had 2,000 views and loads of shares.

“I normally just upload stupid things — pointless videos where I am trying to be funny. This is definitely the most views I have ever had.”

The song makes reference to a wide range of challenges faced during the lockdown, including food shopping, the shortage of face masks and feelings of anxiety.

Mr Hillier has been a children’s entertainer for 15 years, having previously been in charge of the gym at Henley Business School for about 10 years.

His wife Louise works in the doctoral department at the school and they have two daughters, Maisy, 13, who attends Langtree School in Woodcote, and Scarlett, nine, who is at Nettlebed Community School.

Mrs Hillier has been able to continue her job during the lockdown, while her husband has lost hundreds of pounds due to lost bookings.

He said: “All my work has been cancelled for the foreseeable future. Hopefully, they will book again next year. You have got to build up all that good faith again. It is a bit worrying but I know other people have it a lot worse than me.

“I originally came up with the name Bertie Slippers because it sounded like the name of someone who could live in Henley.

“I don’t dress up as a clown. The key is to have outlandish props — I have lots of hand puppets and they are good to keep the attention of the children.

“I let the characters come to life. One of my hand puppets is a crayon called Graham — he is very cheeky.

“I also do magic, music, dance routines and games.

“I have always played music in various capacities. I was in a band that used to do weddings and I have done magic shows for adult audiences.

“After we had kids, we went to a party where we saw a children’s entertainer and I thought ‘I could do that’.

“It chimed with my humorous side — I like the silliness of it all. The children are just there to have a good time and I really enjoy that.”

When the first Clap for Carers event took place, Mr Hillier took his guitar into the street as he and all his neighbours sang Monty Python’s Always Look on the Bright Side of Life.