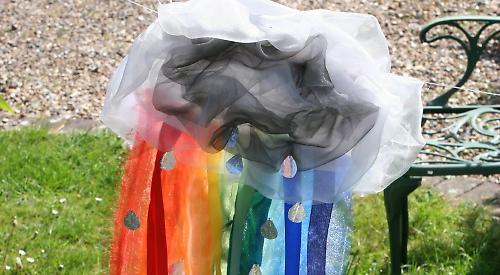 A COUPLE have erected a memorial in their front garden to every victim of the coronavirus outbreak.

Mike Lelliott and Hester Casey, of Hemdean Road, Caversham, have installed a simple wooden plaque which they regularly update with the latest death toll.

They say the artwork, which Mr Lelliott decorated with plants from their garden, including forget-me-nots and a rosemary wreath, is to remind residents of the human cost of the pandemic.

It is decorated with candles and accompanied by a “rain cloud” and rainbow made of fabric which Ms Casey has hung from a tree.

This was inspired by the rainbow artworks which neighbours’ children are sticking in their front windows.

The couple are encouraging passers-by to leave flowers in a basket and have put up a plaque explaining the work. This says: “It is easy to forget these represent real people. Each had a life and would have seen sadness and sorrow, love and joy. They maybe sang and danced and saw life in all its fullness.

“Next time you see those statistics on the news, think about this small memorial in front of you.”

Mr Lelliott, 73, a retired civil engineer, says they were inspired by reports of the high death rate in New York. He said: “The figure is, sadly, always out of date as it’s constantly rising. I track it on my computer and watch the news but we’ve got so used to it that it has almost become unreal.

“They were digging these mass graves in America and saying some people wouldn’t get funerals as no one had claimed the bodies, which was a real shock.

“Even over here, we’re saying about 500 deaths is ‘not so bad’ because it was over 900 at one stage and there’s a danger that people just become statistics.”

The memorial is the latest in a series of art installations which the couple have created over the past two years.

Previous displays have been themed around social issues including kindness, the plight of refugees and the conflict in Syria. Others have been more light-hearted, including buttons which children could press to hear a short recorded greeting from Mr Lelliott.

The couple decided to start making them after seeing something similar while on holiday in Devon.

Mr Lelliott said: “We always try to make it meaningful in some way. The first was a series of cut-out laminated fish with some thoughts on kindness and it has progressed from there on to other subjects.

“We always do something special at Easter or Hallowe’en and our neighbours have done similar things, though they don’t have the time to make them throughout the year. Each one takes me about four or five hours and Hester helps a lot. It takes a lot of work but people enjoy them and we’ve had a few notes and gifts thanking us.”