Student runs marathon a day for week in aid of NHS 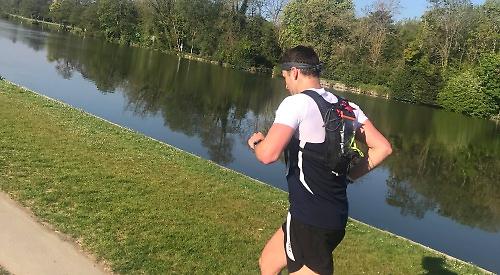 A STUDENT has raised more than £9,000 for the NHS’s coronavirus appeal by running seven marathons in as many days.

Henry Blois-Brooke, from Kiln Green, took up the challenge with his friend Jack Peck at just two days’ notice.

The 21-year-olds, who met and rowed together at Shiplake College, both have demanding fitness regimes so didn’t need to train.

Mr Blois-Brooke, who now rows for Oxford Brookes University, where he is studying for an exercise science degree, ran along the Thames Path while Mr Peck ran through the countryside near his home in Buckinghamshire.

The pair were inspired by centenarian Captain Tom Moore, who made headlines last month after raising millions of pounds for the NHS by walking 2.5km in lengths of his garden.

They tracked their progress using GPS running watches and would chat online at the end of each day to give each other encouragement.

Mr Blois-Brooke started at 6am each day and ran along the River Loddon near Wargrave before joining the main path, then headed through either Sonning or Caversham to Purley or Temple Island in Henley before turning back. He began early to avoid other walkers and always kept a distance of more than 3m from other people.

On average, he finished each 26.2-mile run in about three hours and 40 minutes, beating the four hours and 17 minutes set by his friend.

At the end of each run, his parents Mark and Amanda and sister Eleanor would help him recover by preparing a full English breakfast, which he would follow up with heavy lunches and dinners of pasta and potato to refuel for the following day. On the final day, he enjoyed a barbecue.

Mr Blois-Brooke, who hopes to join the Parachute Regiment, is now taking a break from his training regime, which includes 30km of rowing plus weightlifting on six days a week, because he has pain in his hip and is walking on crutches. He expects to recover before his next challenge, which will be an 86-mile run along the Ridgeway.

Mr Blois-Brooke said: “I’ve always been drawn to the extreme end of fitness, which is why I applied to such an elite regiment, so I agreed to do this straight away.

“It wasn’t easy but I had my rowing fitness to fall back on, although that doesn’t prepare you for the psychological side of it.

“Being under lockdown, the runs were pretty uneventful and the biggest challenge was the mental battle. It was by far the hardest thing I’ve ever done, actually.

“It was hard going out because each step takes you further from home and it’s a lot easier after you’ve turned around — then you can just concentrate on putting one foot in front of the other and focus on that ‘left, right’ rhythm.

“I reminded myself of the determination I would need to get into the Paras.

“My family thought it was a pretty nutty thing to do but they were very supportive. They wouldn’t have been up long when I was getting back home but they really helped to keep me fuelled through the week.

“Now I’m resting and eating a lot and walking on an old pair of crutches we’ve had lying around as well as doing plenty of stretching.

“I had a slight niggle in my hip at the start and that became worse over time, although I’m hoping it will clear up without me having to see a doctor.”

“Jack and I stayed in touch and it was good to chat about how we’d done. We didn’t imagine we’d absolutely crush our original target. The money has kept rolling in and we’re so thankful to everyone who supported us.

“The NHS is doing such an amazing job and we wanted to help in whatever way we can.”

The following month, he was in the GB men’s eight that won gold at the under-23 world rowing championships in Florida.

In October he completed the Coast to Coast run from Cumbria to North Yorkshire, covering 192 miles in six days and raising almost £3,000 for Help for Heroes and MyAware, which helps people with the degenerative muscular condition myasthenia.