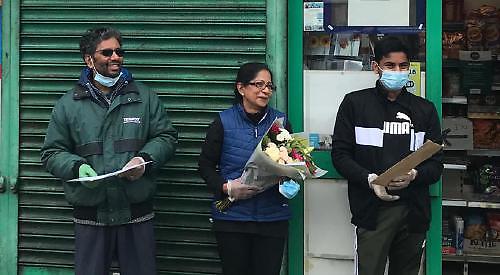 RESIDENTS of Wargrave showed their appreciation for a family-run village food shop by raising £2,275.

The fundraising campaign for the A&I Convenience Store was started on Facebook by Jim Sneddon and originally had a target of £150.

The shop in Victoria Road has been run by Thangarajah Sreemurthy, known as Murthy, and his wife Praba for more than 20 years.

Mr Sneddon, 52, a locksmith who lives in Hamilton Road with his wife Christie, a professional dog walker, said the coronavirus crisis had proved how important the shop was to the community.

He said: “My wife and I use the shop regularly and the couple in there are amazing. They work incredibly hard and it is always with a smile.

“We wanted to give them a bunch of flowers for being so nice, but recent events have shown us how much they are appreciated and we wanted to do more than that. I wanted to set up a fundraiser to show our appreciation. When I closed it we had 1,350 per cent of our original target.”

A small presentation ceremony was held outside the store and villagers were encouraged to clap from a distance and beep their car horns instead of attending.

Mr Sneddon said: “We wanted to have a decent presentation and get them out but it would have been irresponsible to get everyone who donated to come.” Chris Cordrey, 68, of Victoria Road, who came up with the original idea, said: “When the isolation and the virus hit, the shop was in huge demand and they did a great job getting supplies when people couldn’t get them at the supermarket.

“We originally thought about cards and flowers but so many people picked this up around the village. There were so many good wishes and donations coming through. It just kept increasing and we stopped it when we had barely been going for a week.”

Mr Cordrey, a corporate fundraiser, lives with his wife Lorie, who runs fitness classes. He said it was more important than ever to support local businesses following the closure of other village shops in recent years.

He said: “It is the only shop we have got left and they have done a great job for us over 20 years. We need to support this lovely Sri Lankan family and show them how much they are valued in our community. We want them to have a good weekend away and have a rest because they have been working many long hours lately.

“We live in such a great village. These awful situations really bring out the best in people. This situation will pass and we need people to support them in the good times as well as the bad.”

The Sreemurthys were presented with a cheque and flowers as well as a card with the names of all 120 people who had donated.

They said immediately that the money should go to Wargrave charities but were told to spend it on a treat for themselves.

Mr Sneddon said: “When all this is over they have some money to go on holiday. It is not just now — over the years they have always been incredibly nice people and the best way we can show how much we appreciate them is to continue to use them rather than going to the big supermarkets.

“Since the lockdown has started they have seen a lot of new customers and if they continue to shop there that would be really nice to support them. I think this experience has been a big eye-opener for many people.”

Mr Sreemurthy said: “It was such a nice thing and they managed to keep it as a surprise. It shows they appreciate what we are doing at this difficult time.

“We have been here nearly 21 years and it is a lovely community — I feel like it is my home.”