Mother hopes US hospital can save boy with cancer 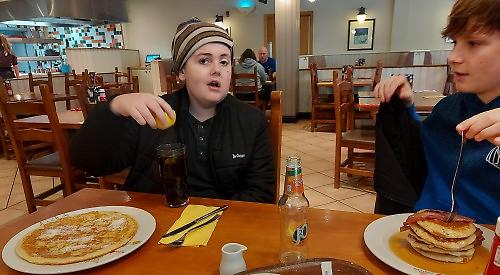 THE family of a boy fighting cancer for a third time say they haven’t given up hope after being told he is not eligible for a trial in America.

Charlie Ilsley, 13, of Buckingham Drive, Emmer Green, has been given just months to live after chemotherapy and immunotherapy treatment failed.

His parents Mark and Toni had hoped he would be accepted for a trial at St Jude Children’s Research Hospital in Memphis, Tennessee, which specialises in treatment of cancers.

But they have been told it wouldn’t be possible for Charlie to take part in the trial as it is for brain cancer rather than disease of the spine, which is what he is suffering from.

Mrs Ilsley says she is now exploring other options and has all her son’s scans and medical notes from his consultant at the John Radcliffe Hospital in Oxford.

She is researching and applying for any medical trials she feels may help Charlie, who currently doesn’t have any symptoms.

She is is contact with several hospitals in America and hopes her son will be suitable for a trial at Seattle Children’s Hospital. The treatment is called CAR T-cell therapy, a type of immunotherapy, where the cells are collected and altered slightly so that they target cancer cells when returned to the body.

Mrs Ilsley said: “It’s really successful on leukaemia and blood cancers and they are now trialling it on solid tumours. It’s beneficial because it’s different, it’s not chemotherapy-based.

“Charlie’s had lots of chemotherapy and obviously it has not worked so I don’t really want to give him anymore.

“I have sent everything over to the hospital. They have sent me lots back on places to stay and transport. I don’t really see why Charlie wouldn’t be eligible for this and I’m hoping that he will be. It might be a lot easier to get to America if we go in three or four weeks.”

Mrs Ilsley has also emailed her son’s scans to the Williams Cancer Institute in Atlanta and to a hospital in Mexico to investigate other forms of immunotherapy.

The latter has offered to treat Charlie with two immunotherapy drugs he has not had before at a cost of £57,000 in a matter of weeks. The board at the University of Texas MD Anderson Cancer Centre in Houston is also looking at Charlie’s scans to see if it can help.

Last week Charlie began a course of four drugs designed to deprive cancer cells of the nutrients they need to survive, including metformin, which is used to treat type two diabetes, and the antibiotic doxycycline.

Mrs Ilsley said: “This is no way near a cure but I’m hoping it will hold it for a while and keep him well so I can get to America and get this trial done. I don’t want to make a rash decision. I want to go for something that’s really beneficial.”

Mrs Ilsley thanked the community for their support.

She has been contacted by many people offering donations and to hold fundraising events.

When she appealed for help in getting flights to America she was contacted by a British Airways pilot.

Mrs Ilsley said: “She said, ‘I’m a pilot for BA and I’ll do everything I can to get you over there’. I messaged her to say we might be going to Seattle and said ‘we might still need your help’.

“I’m always grateful for all the help people offer and the support for Charlie definitely helps get you through. You wake up every morning not knowing what to expect. It’s another day of sitting on the computer looking for treatments but you just carry on. No way am I going to give up.”

Charlie was given the all-clear for the second time in August after undergoing specialist radiation treatment in Turkey which his family had to raise the money to pay for.

But in November they were told the disease had returned after a lumbar puncture showed cancer cells in his spinal fluid and a scan in March showed the disease prominently in his spine and in new areas.

Charlie had been receiving the drug etoposide through a reservoir inserted under his scalp in January and topotecan but these treatments have now ceased.

In 2015 he was diagnosed with a brain tumour and another on his spine. He underwent a 10-hour operation and had 31 sessions of radiotherapy followed by chemotherapy before being given the all-clear in March 2016.

Then in spring 2018 two tumours were discovered on his spine. He was taken to Turkey for CyberKnife radiotherapy treatment and was given the all-clear for a second time before the disease returned.